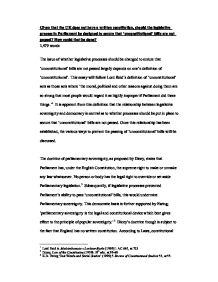 UK Written Constitutionshould the legislative process in Parliament be designed to secure that 'unconstitutional' bills are not passed? How could that be

they are guided by administrative and political guidelines rather than substantive principles.20 As Oliver suggest, the solution lies in the implementation of non-statutory scrutiny standards and checklists, independent from the subject matter of the bill.21 These standards would serve a referential and educational role for committees, improving the scrutinisation process and the substantive content of bills. However, as Oliver concedes, select committees cannot prevent Parliament passing 'unconstitutional' bills as they can only ensure that Parliament is aware of 'the departure from normal expectations.'22 Hence, scrutiny standards can only act as checks against 'unconstitutional' bills. A body that can prevent the passing of 'unconstitutional' bills has to have legitimacy to exercise legislative power and maintain constitutionally democratic principles. Whilst the House of Commons has the legislative authority, it is highly partisan and with the government's majority in the house, it is unlikely that it will perform non-partisan function vital to democracy.23 This is illustrated in the failure of Parliament to make changes to parliamentary scrutiny recommended by the Liaison and Modernization Committee. The House of Lords however is fairly apolitical as its members are 'relatively free from party pressures'24 and there are a large number of cross-benchers. Furthermore, its members tend to be experienced and experts in their respective fields. This means that debates in the house is based more on merits rather than party loyalty.25 As Russell concludes, an independent upper-house 'can help create a form of consensus politics which results in better political outcomes in the longer term.'26 The non-partisan nature and the security of tenure of the Lords enable the house to give substantive considerations to constitutional issues. ...read more.