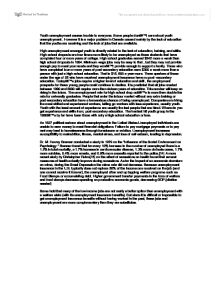 Youth unemployment causes trouble to everyone. Some people don�(tm)t care about youth unemployment . However it is a major problem in Canada caused mainly by the lack of education that the youths are receiving and the lack of jobs that are available. High unemployment amongst youth is directly related to the lack of education, training, and skills. High school dropouts are four times more likely to be unemployed as those students that have completed four or more years of college. High school graduates earned $242 more a week than high school dropouts in 1994. Minimum wage jobs may be easy to find , but they may not provide enough pay to meet your needs and they won�(tm)t provide enough to support a family. ...read more.

This number will keep on rising in the future. The unemployment rate for high school drop out�(tm)s is more than double the rate for university graduates. People that enter the labour market without any extra training or post-secondary education have a tremendous chance of being unemployed. Companies are hiring the most skilled and experienced workers, letting go workers with less experience, usually youth. Youth with the least amount of experience are usually the last people that are hired. Where do you get experience and skills from; post-secondary education. The hardest hit youth group in the 1990�(tm)s by far have been those with only a high school education or less. An 1837 political cartoon about unemployment in the United States.Unemployed individuals are unable to earn money to meet financial obligations. ...read more.

As for the impact of an economic downturn on crime, during the Great Depression the crime rate did not decrease. Because unemployment insurance in the U.S. typically does not replace 50% of the income one received on the job (and one cannot receive it forever), the unemployed often end up tapping welfare programs such as Food Stamps or accumulating debt. Higher government transfer payments in the form of welfare and food stamps decrease spending on productive economic goods, decreasing GDP.[citation needed] Some hold that many of the low-income jobs are not really a better option than unemployment with a welfare state (with its unemployment insurance benefits). But since it is difficult or impossible to get unemployment insurance benefits without having worked in the past, these jobs and unemployment are more complementary than they are substitutes. ...read more.