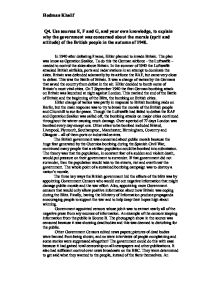 Use sources E, F and G, and your own knowledge, to explain why the government was concerned about the morale (sprit and attitude) of the British people in the autumn of 1940.

Hodman Khalif Q4. Use sources E, F and G, and your own knowledge, to explain why the government was concerned about the morale (sprit and attitude) of the British people in the autumn of 1940. In 1940 after defeating France, Hitler planned to invade Britain. The plan was know as Operation Sealion. To do this the German airforce - the Luftwaffe - needed to control the skies above Britain. In the summer of 1940 the Luftwaffe attacked British airfields, ports and radar stations in an attempt to dominate the skies. Britain was defended adamantly by its airforce the RAF, but came very close to defeat. This was the Battle of Britain. It was a change of tactics by the Germans that saved the country from defeat in the air. Hitler decided to bomb some of Britain's most vital cities. On 7 September 1940 the first German bombing attack on Britain was launched at night against London. ...read more.

If that government did not surrender, then the population would take to the streets, riot and overthrow the government. The whole point of a sustained bombing campaign was to destroy a nation's morale. The three key ways the British government hid the effects of the blitz was by appointing Government Censors who would cut out negative information that might damage public morale and the war effort. Also, appointing more Government censors that would only allow positive information about how Britain was coping during the Blitz. Finally, having the Ministry of Information produce propaganda encouraging people to support the war and to help keep their hopes high about winning. Government appointed censors whose job it was to extract nearly all of the negative press from any sources of information. An example of the censors keeping information from the public is Source B. The photograph show in the source was censored because it was showing dead bodies and this was deemed to disturbing for the public. ...read more.

These were very successful and proved to have a great impact on the people at home. Source E proves this because it shows report from the Ministry of Information to the government that inform them on the mood and attitude of the public. It shows that people are panicky and hysteric and that flight from the East End was growing rapidly, also it shows people were seeking shelter in railway stations rather than the shelters that were provided. In conclusion: the British government was concerned with public morale and spirit because it was Hitler's plan to break the morale of the British people and force the government to surrender. As a result the government took some measures to insure that they public did not panic and that morale was high, it meant most people were in the dark and did not know that really extent of the damage. ...read more.