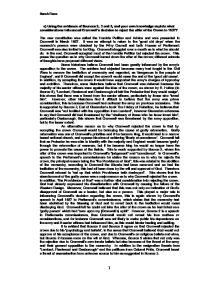 Using the evidence of Sources 2, 3 and 5, and your own knowledge explain what considerations influenced Cromwell's decision to reject the offer of the Crown in 1657?

a) Using the evidence of Sources 2, 3 and 5, and your own knowledge explain what considerations influenced Cromwell's decision to reject the offer of the Crown in 1657? The new constitution was called the Humble Petition and Advice and was presented to Cromwell in March 1657. It was an attempt to return to the 'good old days' when the monarch's powers were checked by the Privy Council and both Houses of Parliament. Cromwell was also invited to be King. Cromwell struggled over a month as to what he should do. In the end, Cromwell accepted most of the Humble Petition but rejected the crown. This poses the question as to why Cromwell turned down the offer of the crown; different schools of thoughts have proposed different views. Some historians believe Cromwell had been greatly influenced by the army's opposition to the crown. The soldiers had objected because many had fought in the Civil Wars to remove the institution of monarchy and regarded, as 'dangerous to the people of England', and if Cromwell did accept the crown it would mean the end of the 'good old cause'. In addition, by accepting the crown it would have supported the army's charges of hypocrisy and ambition. Therefore, some historians believe that Cromwell was deterred because the majority of his senior officers were against the idea of the crown, as shown by R. Hutton (in Source 5), "Lambert, Fleetwood and Desborough all told the Protector that they would resign", this shows that there was a threat from the senior officers, particularly by those who "loved him". However, other historians find it difficult to believe that the army was prime consideration; this is because Cromwell had outfaced the army on previous occasions. This is supported by Source 3, Earl of Clarendon's book The History of Rebellion, he believes that Cromwell was "not terrified with the opposition from Lambert", however Clarendon advances to say that Cromwell did feel threatened by the "obstinacy of those who he knew loved him", particularly Desborough, this shows that Cromwell was threatened by the army opposition, but to the lesser extent. ...read more.

One of the principal factors which prevented Cromwell from reaching a lasting political settlement was the poor relationship between Cromwell and Parliament. Initially Parliament were angered by the fact that the Instrument of Government (December 1653) had been proposed and imposed by army officers, in particular Lambert, thus the constitution lacked legitimacy. Many MP's objected the powers given by the constitution to Cromwell and the army. The members of the First Protectorate Parliament (September 1654) were not submissive to Cromwell and most had conflicts with some aspect of the constitution. Parliament refused to ratify the constitution, meaning that Cromwell's government had no authority to continue, which weakened the relationship further and moved away from being able to reach a political settlement. Moreover, Parliament failed to pass thee 84 ordinances of Cromwell, which showed that Parliament and Protector were unable to work together, eventually leading to the dissolution after 5 lunar months. Cromwell demanded that all MP's swear an Oath of Loyalty to the Protectorate, this was an attempt to unite Parliament and Protector, but those who refused were excluded, and those who stayed only did so to dismantle the constitution clause by clause. Thus, most of the nation was "boggled" at what the Instrument stood for. The Second Protectorate Parliament (September 1656) soon angered Cromwell, particularly over the case of James Naylor. Cromwell did not agree with harsh punishment, as he wanted to achieve liberty of conscience, thus disrupted the relationship between Parliament and Protector. Source 1 shows the other consequence of the Naylor case, that Cromwell felt it was "time to come to settlement" and to "lay aside arbitrary proceedings", which shows that Cromwell felt that the Instrument of Government was ineffective and there needed to be further checks and balances of power, and he expresses the need for a "judicial power" that could "determine men's punishments"; these issues needed to be addressed, which the Instrument of Government was clearly not able to. ...read more.

Thirdly, the Humble Petition and Advice still had army influence, and they continued to be a major force within the Protectorate. Cromwell used his powers to promote his colleagues to the Upper House, who were predominantly army members. Cromwell's close attachment to the army made it unlikely to gain a long term settlement because the majority opposed the army influence in political affairs. Source 5 shows that the army did have an impact on Cromwell, specifically when he was offered the crown, at first Cromwell "expressed his readiness to accept", however the opposition faced from the army "compelled Cromwell's decision". Undoubtedly, the army did play a role in influencing Cromwell's decision to reject the crown, but to what extent is still debateable. The intervention of the army in politics was definitely a 'fatal internal contradiction' because Cromwell was leading a nation opposed to any military element in government with the army, resulting in everlasting disputes. In conclusion, Cromwell was not able to reach lasting political settlement due to the 'fatal internal contradictions' and there were many of them, which hindered the aim of establishing an inclusive and stable government. Cromwell's crisis was that it "embraced two divergent trends" and because of this, the effects of the two conflicting aims were able to be seen throughout the Protectorate. There were 'fatal internal contradictions' in the sense that there were too many conflicting interests to please, and that the Cromwell was far too closely associated with the army and its politicisation. There were further conflicts between establishing godly rule for which Cromwell needed the army and arriving at political settlement which would be long-lasting. These conflicts within the Protectorate were serious and this became apparent when the republic collapsed. The political settlement was fairly stable in the short-term but it collapsed in the long-term. Cromwell needed to "come to a settlement, and lay aside arbitrary proceedings" but with all the 'internal contradictions', he was not able to establish a lasting political settlement by the time of his death in September 1658. Sarah Raza 1 ...read more.