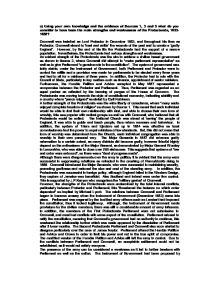 Using your own knowledge and the evidence of Sources 1, 3 and 5 what do you consider to have been the main strengths and weaknesses of the Protectorate, 1653-1658?

a) Using your own knowledge and the evidence of Sources 1, 3 and 5 what do you consider to have been the main strengths and weaknesses of the Protectorate, 1653-1658? Cromwell was installed as Lord Protector in December 1653, and throughout his time as Protector, Cromwell aimed to 'heal and settle' the wounds of the past and to create a 'godly England'. However, by the end of his life the Protectorate had the support of a narrow population. Nevertheless, the Protectorate had various strengths and weaknesses. An evident strength of the Protectorate was the aim to achieve a civilian based government as shown in Source 3, where Cromwell did attempt to "make parliament representative" as well as to give Parliament "a genuine role in the constitution". The system of government was fairly stable, under the Instrument of Government, both Parliament and Protector were to control the militia and a provision was made for parliaments to be elected every three years and had to sit for a minimum of three years. In addition, the Protector had to rule with the Council of State, particularly in key matters such as finance, appointment of senior ministers. Furthermore, the Humble Petition and Advice accepted in May 1657 represented a compromise between the Protector and Parliament. ...read more.

The Protectorate narrowed its support by restricting the franchise to those who were 21yrs old and had property. The Commonwealth men opposed the single person element in government and felt Parliament did not enough power, and Cromwell was "accused of being both a hypocrite and a turn-coat". In addition, royalists generally opposed the regime, particularly when the Decimation Tax was introduced as it alienated them further. The military element of the regime was resented by the gentry. Therefore, it seems Cromwell "got the worst of both worlds", in that there were conflicting interests and aims, the "excessive demands of others" hindered Cromwell to "bring democracy to its head". b) Using all the evidence of the sources, and your own knowledge, explain how far you agree that "The stability and survival of the Protectorate from 1653-1658 was wholly dependent on Oliver Cromwell himself". It is evident that Cromwell was an ambitious and industrious character; he became Lord Protector out of the "desire to prevent mischief and evil" rather than to "serve...as a King", this he made clear in his speech to the Second Protectorate Parliament in 1657, Source 4. Therefore, Cromwell wanted to lead "as a constable", however Cromwell had become more involved and although he wanted to "keep the peace of the parish", more than that as Lord Protector, he wanted to achieve his personal vision of the 'rule of Saints'. ...read more.

Although, the Protectorate was fairly dependent on Cromwell, Parliament also contributed significantly to the regime, the proposal of the Humble Petition and Advice in 1657 was an attempt to create more checks and balances and to balance power. Cromwell did need to work with Parliament, as he needed the approval of Parliament in order to make the regime legal. Therefore, the "stability and survival of the Protectorate" did very much so depend on Cromwell, as suggested by Cyril Robinson, she identifies that the Protectorate was no longer able to survive after Cromwell's death, because "the Protector himself had been to strong". On the contrary, Michael Lynch believes that Cromwell never actually "pushed his authority to the point where he had a genuine controlling power". However, there is agreement in that Cromwell did attempt to achieve "effective civilian government" and that "religious difficulties were in a large measure overcome". But, it needs to be taken into account that as Cyril Robinson is a Whig historian, this school of thought portray as Cromwell as a strong dictator, which is not necessarily a bad criticism. Overall, the Protectorate was dependent on Oliver Cromwell, but not necessarily "wholly", because Cromwell did have to work with Parliament in order to achieve a settlement. But, the Protectorate did heavily rely on Cromwell's personality and political as well as military skills. ...read more.