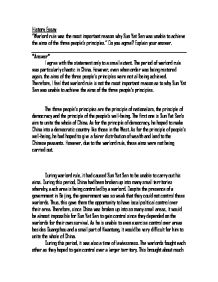 &quot;Warlord rule was the most important reason why Sun Yat Sen was unable to achieve the aims of the three people's principles.&quot; Do you agree? Explain your answer.

During this period, it was also a time of lawlessness. The warlords fought each other as they hoped to gain control over a larger territory. This brought about much suffering to the Chinese people. Sun Yat Sen's principle of democracy is not being upheld as these warlord ruled over their area like a dictator. These warlords exploited the people under them, like the peasants. Thus it is clear that Sun Yat Sen's principle's are not being achieved or even upheld. He, himself could not do anything as his party and government was still too weak. However, this period of warlord rule is not the only factor that prevented him from being unable to achieve his aims. Due to the disunity in his party, Kuomintang (KMT), he could not achieve the aims of his three principles. Before he can actually unite the whole country, he would need to unite his party members. ...read more.

Due to the disunited KMT party, the CCP started to gain a foothold politically in China. Due to the formation of the CCP, KMT had problems trying to achieve their aims as the CCP do not believe in their principle of Democracy and Nationalism. Thus, this made it very difficult for them to achieve their aims if they are not even politically strong within their own country. I do not feel that warlord rule is the most important reason as other reasons had played a more major role in preventing these 3 principles from being achieved. I feel that the most important reason is disunity within the party. For Sun Yat Sen to be able to control the whole country, he must first be able to unify his own party members. If not all his party members believe in the same ideals, it would be it very difficult to be carried out. Therefore, it led to many half-hearted attempts being carried out by the KMT to achieve these three principles. ...read more.