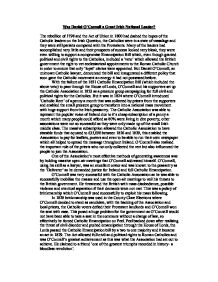 Was Daniel O'Connell a Great Irish National Leader? The rebellion of 1798 and the Act of Union in 1800 had dashed the hopes of the Catholic leaders on the Irish Question, the Catholics were in a state of vassalage and they were still pariahs compared with the Protestants. Many of the leaders had accomplished very little and their prospects of success looked very bleak, they were even willing to support a compromise Emancipation Bill which, even though granted political and civil rights to the Catholics, included a 'veto' which allowed the British government the right to vet ecclesiastical appointments to the Roman Catholic Church in order to ensure that only 'loyal' clerics were appointed. But Daniel O'Connell, an unknown Catholic lawyer, denounced the bill and inaugurated a different policy that soon gave the Catholic movement an energy it had not possessed before. With the failure of the 1821 Catholic Emancipation Bill (which included the above veto) to pass through the House of Lords, O'Connell and his supporters set up the Catholic Association in 1823 as a pressure group campaigning for full civil and political rights for the Catholics. But it was in 1824 where O'Connell introduced 'Catholic Rent' of a penny a month that was collected by priests from the supporters and enabled the small pressure group to transform into a national mass movement with huge support from the Irish peasantry. ...read more.

The Act allowed full civil and political rights to Roman Catholics and was O'Connell's greatest achievement as this was what the Association had set out to achieve. He claimed to a friend 'one of the greatest triumphs recorded in history- a bloodless revolution'. In 1840 O'Connell began the Repeal Campaign which was very similar to the Catholic Association and employed similar methods such as the 'Repeal Rent'. But unlike the Association it collapsed as O'Connell himself was not too committed with the Campaign and also the Catholic middle classes were more concerned about economic gains from the Union. O'Connell again used his policy of brinkmanship but this time it was not successful, in 1843 the monster meeting in Clontarf was banned by Peel and Peel threaten military action by sending a small army and a naval ship. In this confrontation we see the limitations of mass mobilisation and brinkmanship as O'Connell is forced to back down, as he is not prepared to back up his rhetoric with violence. So the Repeal Campaign was a failure for O'Connell. The Catholic Emancipation Act of 1829 had an important impact on Westminster as it led to the split of the Tory Party with the emergence of the new Whig Party, and also allowed 33 O'Connellites to take seats in the House of Commons. ...read more.

Though the year 1840 shows the decline of the Whig-Irish alliance as in 1841 Peel returned to office with a majority and the Irish Party lost its significance and thus also lost its impact on Westminster. There were major political differences between Peel and O'Connell and Peel personally hated O'Connell so the Irish Party were unable to cooperate with the new government. This shows that O'Connell only made an impact during hung parliament where his party's support was the deciding factor. Though O'Connell did achieve some reforms, these included the Irish Poor Law Act which set up workhouses in 1838 and he used his political leverage to persuade Thomas Drummond to reform the police and the judiciary in Ireland. Even though Daniel O'Connell failed to achieve the Repeal of the Union he was still a great leader, he had built a rapport with the masses and began the first effective pressure group by forming the Catholic Association. But instead of becoming a great Irish national leader, he became a great Irish national Catholic leader as he rather divided the two religious communities with methods such as the Catholic Association. O'Connell achieved a lot for Ireland, making an impact on the parliamentary scene and helped to bring about some legislative reforms, though his greatest accomplishment was the Catholic Emancipation Act. But after 1840 he failed to achieve anything more as the Repeal Campaign was a dismal success and he was politically impotent during the Great Famine. ...read more.