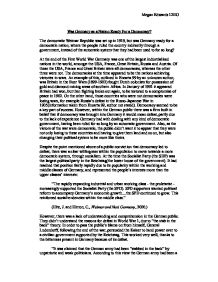 Was Germany as a Nation Ready For a Democracy?

Was Germany as a Nation Ready For a Democracy? The democratic Weimar Republic was set up in 1919, but was Germany ready for a democratic nation, where the people ruled the country indirectly through a government, instead of the autocratic system that they had been used to for so long? At the end of the First World War Germany was one of the largest industrialised nations in the world, amongst the USA, France, Great Britain, Russia and Austria. Of these the USA, France and Great Britain were all democracies, whereas the other three were not. The democracies at the time appeared to be the nations achieving victories in wars. An example of this, outlined in Encarta 99 by an unknown author, was Britain in the Boer Wars (1899-1902) fought Dutch colonists for possession of gold and diamond mining areas of southern Africa. In January of 1901 it appeared Britain had won, but then fighting broke out again, to be restored to a compromise of peace in 1902. On the other hand, those countries who were not democracies were losing wars, for example Russia's defeat in the Russo-Japanese War in 1905(information taken from Encarta 99, author not stated). ...read more.

(Williamson, D.G., The Third Reich, 1985) Germany's population in general had no real idea of what a democracy was, having never lived in one, and never having had a political system even close to a democracy. Many people wanted things to stay how they were, afraid of change. The Government before the Revolution contained a large variation within itself. It had two houses, the Bundesrat(upper house) and the Reichstag(lower house). The Bundesrat was formed of the aristocracy, the landowners and state governors. The Reichstag was made up of a number of parties, and a number of these showed the way forward for democracy, for example the SDP, liberal parties (e.g.. DVP) and conservatives. The spectrum of variation within the government showed there was room for political change, with a large number of different views held within parties made up of different classes of people, all interested in benefiting different sectors of the population. However, despite this contemporary willingness within the government for a move towards socialism and liberalism, previous political leaders had been very against both of these, and this attitude would have been drummed into the population, some of which would still have been remaining in them. ...read more.

Throughout German history one person had ruled the country, but changing to a democracy meant that the whole nation would, in effect, be ruling the country. This dramatic change could lead to extremism, with the autocracy fighting against communism. Was Germany ready as a nation to become a democracy? Although democracy appeared to be working in other industrialised nations at the time, e.g. the USA, Germany was not ready for the system. Pockets of the population, e.g. the Socialists, wanted a democratic system, but a combination of factors meant the country was not prepared. Generally within the public, following the First World War, there was an anti-socialist feeling(because of the "stab in the back" idea which blamed the socialists for losing the war), and as socialists wanted democracy this turned the population against it. Economic frailty following the Treaty of Versailles made Germany weak and meant it was not a good time for a dramatic political change. If Germany had changed to a democracy a decade or so later, after the repercussions of World War 1 would have had time to ease and die down a bit, it would have been more likely to be successful, but at this point in history Germany was not ready to become democratic. ?? ?? ?? ?? Megan Edwards 12HO ...read more.