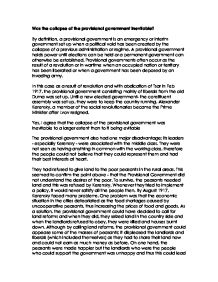 Was the collapse of the provisional government inevitable

The irony part is that the revolution, made partly based on dissatisfaction with the war, led to the election of socialist partied that tried to turn political power over to Russia's landlords and capitalists who continued the war as if no revolution had happened. In fact, the latter initially believed that the revolution might restore the faith of the masses in the war effort and lead the troops to fight hard for their newly won "freedom." Far from making the war more efficient, the February revolution ushered in a period of intense class conflict which fatally undermined the army's discipline and cohesiveness. The army, made up of predominantly peasant conscripts, increasingly came into conflict with the officer corps, drawn heavily from the families of landlords and nobles. The struggle in the countryside between the peasants and landlords infected the army, as both officers and soldiers heard news from home about forcible land redistribution, and even more directly when the military was called on to repress the peasant movement in the countryside. When they 'gave up' on the war, not only did the Russians feel sad, they felt that they had 'lost face' as well. ...read more.