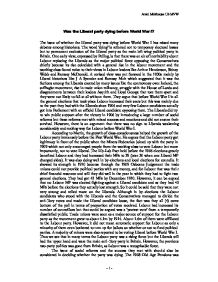 Was the Liberal Party Dying Before World War I?

Was the Liberal party dying before World War I? The issue of whether the Liberal party was dying before World War I has raised many debates among historians. The word 'dying' is referred not to temporary electoral losses but to permanent exclusion of the Liberal party as the main left wing political party in Britain. One early view, expressed by Pelling, is that there was an air of inevitability about Labour replacing the Liberals as the major political force opposing the Conservatives chiefly because its rise coincided with a general rise in the labour movement and the working class found voice to their views in Labour leaders like Arthur Henderson, Sidney Webb and Ramsay McDonald. A revised view was put forward in the 1930s mainly by Liberal historians like J A Spender and Ramsay Muir which suggested that it was the factions among the Liberals created by many issues like the controversy over Ireland, the suffragist movement, rise in trade union militancy, struggle with the House of Lords and disagreements between their leaders Asquith and Lloyd George that tore them apart and they were not likely to fall at all without them. They argue that before World War I in all the general elections that took place Labour increased their seats but this ...read more.

came bottom of the poll in terms of proportion of votes received. Labour had increased its number of councillors but that could be argued was a 'protest vote' from a temporarily dissatisfied public. Trade unions were seen as a major source of support for the Labour party as the movement grew to about 4.1m by 1914. About 1.6m of them were affiliated to the Labour party. However, it did not mean automatic support for Labour as only a minority of them even bothered to turn up for ballots on whether or not to fund political parties. A majority of miners were also reported to be voting Liberal before World War I. Thus we see that in many terms the Labour party was a rising force but the Liberals still had the upper hand and were the main anti-Tory party in Britain. However, the previous two-party politics was gone from Britain, as Labour was a recognisable force. The issue of social reforms and the success they met with should also be considered in deciding whether the party was dying. The 1908 Old Age Pensions was probably the most important reform introduced by the Liberals and it met with considerable success. ...read more.

movement led to divisions among the Liberals. They used force-feeding to control the fasting movement by the imprisoned suffragettes and this suggested that the government did not really have a direct policy line on the issue. The trade unions were holding extensive strikes (40m working days lost in 1912) and there was a rising feeling of syndicalism. However, this feeling was only with minority of the union leaders and the government did not really face a threat. The Liberals were going to give Ireland Home Rule through the Home Rule Bill of 1912 but the Protestants in Northern Ireland did not want to join Ireland. The government complied with their demands by excluding 6 counties from the proposed Ireland. Thus this showed that the Liberals were following their policy line as well as succumbing under pressure. Thus we see that there are various evidences to suggest that the Liberal party had seized to be the only left wing power in the country opposed to the Conservatives. However, it was still stronger than the supposedly alternative party Labour and there was no strong evidence to suggest that the Liberal party was dying before World War I as they had still large electoral support and most importantly, although not as before, they were still the main opposing force to the Conservatives. ?? ?? ?? ?? Aruni Mukherjee U6 MVW - 1 - ...read more.