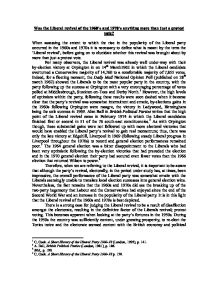 Was the Liberal revival of the 1960's and 1970's anything more than just a protest vote?

Was the Liberal revival of the 1960's and 1970's anything more than just a protest vote? When assessing the extent to which the rise in the popularity of the Liberal party occurred in the 1960s and 1970s it is necessary to define what is meant by the term the 'Liberal revival', before going on to elucidate whether this revival was brought about by more than just a protest vote. For many observers, the Liberal revival was already well under-way with their by-election victory at Orpington in on 14th March1962 in which the Liberal candidate overturned a Conservative majority of 14,760 to a comfortable majority of 7,855 votes. Indeed, for a fleeting moment, the Daily Mail National Opinion Poll (published on 28th march 1962) showed the Liberals to be the most popular party in the country, with the party following up the success at Orpington with a very encouraging percentage of votes polled at Middlesbrough, Stockton-on-Tees and Derby North.1 However, the high levels of optimism within the party, following these results were soon dashed when it became clear that the party's revival was somewhat intermittent and erratic, by-elections gains in the 1960s following Orpington were meagre, the victory in Ladywood, Birmingham being the sole success in 1969. Alan Ball in British Political Parties writes that the high point of the Liberal revival came in February 1974 in which the Liberal candidates finished first or second in 51 of the 76 south-east constituencies.2 As with Orpington though, these substantial gains were not followed up ...read more.

During the period 1960-1970 the Liberal party's official policies remained largely consistent with most of their post-war policies, although there was a more marked emphasis on the need to redistribute wealth and tackle inflation.10 This strengthens any argument that the party's revival was the result of a protest vote because it is clear that the Liberals were not doing anything markedly different with regards to their policies that would explain their increase in popularity. In short, their revival was due to a protestation by the electorate of the two major parties rather than a result of an approval by the electorate of Liberal policies. The General Election results also shed light on the nature of the Liberal revival. Although the Liberal party, as aforementioned, had enjoyed a number of by-election gains in the period under study, they still lacked a General Election breakthrough. This can be explained by pointing out that it is very common in the modern electoral system, for voters to protest vote at by-elections but at the General Election there is usually a marked 'swing' in which voters frequently revert to their party loyalties or real party of preference.11 Thus, the fact that a General Election breakthrough eluded the Liberal party during this period would suggest that there rise in popularity was the result of the electorate using the party to protest against Labour and the Conservatives at by-elections, although the British first past the post voting system also played a significant role in restricting a general election breakthrough. ...read more.

J. Stevenson writes that the lowering of the age of voting to 18 in 1969 may have further aided the Liberal revival because of the cohorts of younger voters whose partisanship was traditionally less strong. However, Stevenson, wisely, does not go as far as to say that there was a definite causal link between the lowering of the voting age and the Liberal revival as this may have been hard to sustain but that the emergence of more swing voters and less party loyalty was likely to have allowed the Liberal party to break the two-party hegemony of the 1950s.17 Tony Greaves succession as chairman of the Liberal party in March 1970 was symbolic of a significant development in the Liberal revival; the rise of 'community politics'. The roots of this new 'community politics' lay in student and radical disillusion with the Labour Government of Harold Wilson after 1964. Experience in direct action campaigns and demonstrations convinced many young activists that the only way to secure effective change was at grass-roots, community level. This technique soon became perfected by the Liberals so that they were able to build up a strong council base. Thus, after 1966, the Liberals built up local election successes in Liverpool, parts of Leeds and Birmingham at Ladywood-a Labour stronghold. These gains made by the Liberal party were judged to be axiomatic of a productive change in the Liberal party's activities and political practises rather than the result of an accumulation of protest votes. ...read more.