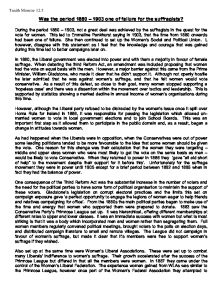 Was the period 1880 - 1903 one of failure for the suffragists? During the period 1880 - 1903, not a great deal was achieved by the suffragists in the quest for the vote for women. This led to Emmeline Pankhurst saying in 1903, that the time from 1880 onwards had been one of failure. She then continued to set up the Women's Social and Political Union. I, however, disagree with this statement as I feel that the knowledge and courage that was gained during this time led to better campaigns later on. In 1880, the Liberal government was elected into power and with them a majority in favour of female suffrage. When debating the third Reform Act, an amendment was included proposing that women had the vote on equal basis with the men. However, a major barrier against this came from the Prime Minister, William Gladstone, who made it clear that he didn't support it. Although not openly hostile he later admitted that he was against women's suffrage, and that he felt women would vote conservative. As a result of this defeat, so close to their goal, many women stopped supporting a 'hopeless case' and there was a dissention within the movement over tactics and leadership. ...read more.

It was an immediate success with women but what is most striking is that it was a body which incorporated men and women rather than segregating them. Full women members regularly convened political meetings, brought voters to the polls on election days, and distributed campaign literature to small and remote villages. The League did not campaign in favour of women's suffrage, but made it clear that it's members were free to support women's suffrage if they wished. Also set up at the same time were Women's Liberal Associations. These were set up to combat many Liberals' indifference to women's suffrage. Their growth accelerated after the success of the Primrose League but differed in that all the members were women. In 1887 they came under the control of the Women's Liberal Federation. The experience women gained from WLAs was similar to the Primrose League, however once part of the Women's Federal Association they attempted to broaden their membership base, often enlisting professional women of the temperance (anti-alcohol) and moral reform movement. As a result, WLA members learned not only to face the general public in door-to-door canvassing, but to confront male politicians in local meetings. Inevitably, they were introduced to the techniques of practical electioneering, and many learned their lessons well. ...read more.

This Act was a significant advance for married women and removed a source of division between the Suffrage Societies. This led to a conference of all Suffrage Societies in 1896. Speakers at the Conference stressed that the 'political difficulty' within the movement need not divide it since Women's Suffrage was a non-party issue. Suffragists from all groups worked together to organise a petition in support of the franchise. In 1897 this petition was presented to Parliament and used to back the Women's Suffrage Bill, which although did not become law, did get past its second reading and was a catalyst for the formation of the National Union of Women's Suffrage Societies (NUWSS) with Mrs Millicent Garrett Fawcett as it's president. Between 1897 and 1903 the NUWSS coordinated the campaign for women's suffrage and it remained the focus of the constitutionalist approach after 1903. Although, in terms of political gains for the suffragists these 23 years may have seemed to have gained very little, in fact they were invaluable in equipping the movement with knowledge and experience of political campaigning as well as raising the profile of women in the political arena. Without the work put in by women during this time gains made in later years would have been harder to achieve. ...read more.