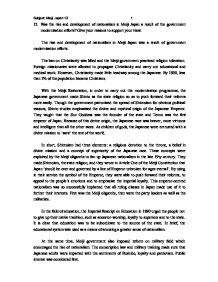 Was the rise and development of nationalism in Meiji Japan a result of the government modernization efforts?

12. Was the rise and development of nationalism in Meiji Japan a result of the government modernization efforts? Give your reasons to support your view. The rise and development of nationalism in Meiji Japan was a result of government modernization efforts. The ban on Christianity was lifted and the Meiji government practiced religion toleration. Foreign missionaries were allowed to propagate Christianity and carry out educational and medical work. However, Christianity made little headway among the Japanese. By 1900, less than 1% of the population became Christians. With the Meiji Restoration, in order to carry out the modernization programme, the Japanese government made Shinto as the state religion so as to push forward their reforms more easily. ...read more.

They made Shintoism, the state religion, and they wrote in Article One of the Meiji Constitution that Japan 'should be over and governed by a line of Emperor unbroken for ages eternal'. By using in their service the symbol of the Emperor, they were able to push forward their reforms, to appeal to the people's emotions and to emphasize the imperial loyalty. This emperor-centred nationalism was so successfully implanted that all ruling classes in Japan made use of it to further their interests. First was the Meiji oligarchs, then were the party leaders as well as the militarists. In the field of education, the Imperial Rescript on Education in 1890 urged the people not to give up their native tradition, such as ancestor-worship, loyalty to superiors and to the state. ...read more.

These achievement, with the aim of judicial reforms was to abolish the extraterritoriality of the unequal treaties, with other factors, Japan went to war with China in 1894. The outcome was a Japanese victory. This victory brought immense benefits to Japan. The upsurge of Japanese nationalism reached a climax. A second victory in the Russo-Japanese War in 1905 further strengthened Japanese nationalism. Japanese nationalism had its own characteristics. It originated in the late Tokugawa periods, but was nursed and fanned up during the Meiji reforms and victorious wars were to remove the feelings of inferiority and contributed to the beginning of a period of nationalism characterized by 'confidence' rather than 'fear'. ?? ?? ?? ?? 2 2 Subject: Meiji Japan 12 Subject: Meiji Japan 12 1 ...read more.