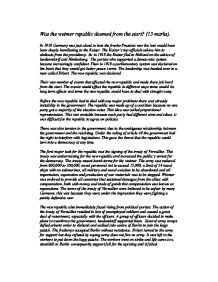 Was the weimer republic doomed from the start?

Was the weimer republic doomed from the start? (15 marks). In 1918 Germany was just about to lose the franko Prussian war the loss would have been deeply humiliating to the Kaiser. The Kaiser's top officials advise him to abdicate from the presidency. So in 1918 the Kaiser fled to Holland on the advice of lundenndorff and Hindenburg. The parties who supported a democratic system became increasingly confident. Then in 1918 a parliamentary system was declared on the basis that they would get better peace terms. The leadership was handed over to a man called Erbert. The new republic was declared. Their was number of events that effected the new republic and made there job hard from the start. The events would effect the republic in different ways some would be long term effects and some the new republic would have to deal with straight away. Before the new republic had to deal with any major problems there was already instability in the government. ...read more.

Weimer was ordered to provide all countries that sustained damages from the allies with compensation, both with money and trade of goods this compensation was known as reparations. The terms of the treaty of Versailles were believed to be unfair by many Germans, this was because they were under the impression they were fighting a purely defensive war. The new republic also immediately faced rising from political parties. The action of the treaty of Versailles resulted in lots of unemployed soldiers and caused a great deal of resentment, especially with the officers. A group of officers decided to make plans to overthrow the government, lundendorff supported them. Several army troops defied erberts order to disband and walked into centre of Berlin to join the kapp putsch. The freikorps occupied Berlin without resistance. Erbert turned to the army for support but they refused by saying army does not fire on army. It was left to the workers to put down the kapp putchs. ...read more.

The cost of the war, lack of confidence in the currency, willingness of government to print money, government expenditure outweighing income, reparations and attempts to put of reparations all contributed to the problem of hyperinflation. It was mainly the middle classes that lost out, also people on fixed incomes such as pensioners and students. There were also people who benefited those with debts and mortgages, tradesman and exporters due to the weakness of the mark. Hyperinflation had advantages and disadvantages in the survival of the weimer. It aided the survival by reducing unemployment; it threatened the weimer by causing the people unhappiness. The weimer republic did not get off to a good start. In the early part the republic faced many uprisings and did not have much support. The republic also had many problems to face in the future. The weimer republic was to be doomed in the end though. You have to remember that the republic was set up and was nether meant to succeed. The conspiracy was called the stab in the back. ...read more.