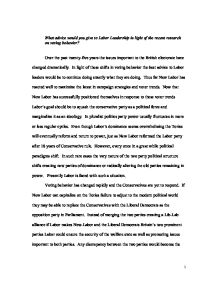 What advice would you give to Labor Leadership in light of the recent research on voting behavior?

What advice would you give to Labor Leadership in light of the recent research on voting behavior? Over the past twenty-five years the issues important to the British electorate have changed dramatically. In light of these shifts in voting behavior the best advice to Labor leaders would be to continue doing exactly what they are doing. Thus far New Labor has reacted well to maximize the latest in campaign strategies and voter trends. Now that New Labor has successfully positioned themselves in response to these voter trends Labor's goal should be to squash the conservative party as a political force and marginalize it as an ideology. In pluralist politics party power usually fluctuates in more or less regular cycles. Even though Labor's dominance seems overwhelming the Tories will eventually reform and return to power, just as New Labor reformed the Labor party after 18 years of Conservative rule. However, every once in a great while political paradigms shift. In such rare cases the vary nature of the two party political structure shifts creating new parties of dominance or radically altering the old parties remaining in power. Presently Labor is faced with such a situation. Voting behavior has changed rapidly and the Conservatives are yet to respond. If New Labor can capitalize on the Tories failure to adjust to the modern political world they may be able to replace the Conservatives with the Liberal Democrats as the opposition party in Parliament. Instead of merging the two parties creating a Lib-Lab alliance if Labor makes New-Labor and the Liberal Democrats Britain's two prominent parties Labor could ensure the security of the welfare state as well as promoting issues important to both parties. ...read more.

In recruiting powerful women studies show that women's political activism directly relates to their economic level and their education.7 This is an excellent reason to recruit intelligent young women from Britain's universities where Labor policy is popular. By recruiting women through traditionally "women's issues" New Labor can stigmatize the Conservative party and develop a grass roots support base. AGE The age gap is a huge advantaged currently held by Labor. The conservative party is dominated by old men who are resistant to change and less open to the shifts in the modern British electorate. The conservative party also derives most of its support from older voters while the vast majority of younger voters favor the Labor or Lib-Dem parties.8 Even though young people are less likely to vote or participate in other traditional forms of political activism they can also be galvanized by political injustice. If young people are motivated they can serve as a swing force in traditional politics. Both Bill Clinton and Tony Blair retook political power by portraying a newer younger image. In order to encourage youth party participation and win votes New Labor must support young peoples issues. Under 35-s are particularly interested in help for the homeless (73%) disabled rights (71%), animal rights (66%) and increased funding for NHS(64%).9 Young people have also been influential in championing civil rights cases and environmental cases. According to Budge as a result of dwindling membership Labor decided to renovate and modernize the party by recruiting new, younger members. This led to a membership increase of 400,000, and aided New-Labor in their 1997 landslide victory.10 Furthermore, the long term benefits of gleaning youth support far outweigh the short term ones. ...read more.

Once Lib-Lab has made the conservatives the third party in parliament they will become the victims of tactical voting, and the electoral system that has plagued the Lib-Dems for so long. In a system where Tories are the third party many conservatives will vote tactically for Lib-Dems as an opposition to Labor, rather than "wasting their vote" by voting Conservative. Even if the Conservatives win a significant proportion of the vote, they will not have enough seats to mount a serious opposition to Labor or Liberal Government. Eventually voters will get into the habit of voting for either Labor or Lib-Dem. The topics of debate will revolve around the differences between the two parties. The Liberal Democrats will move more to the right to consume much of the young conservative vote. At the same time Labor will move slightly to the left to draw upon Old Labor Socialists who abandoned New Labor. If the Labor Party is able to accomplish the monuments task of bringing about a new era of British politics the rewards could be innumerable. First, this new paradigm will ensure the future of the welfare state and virtually eliminate sweeping reforms similar to those to the Thatcher era. In addition, Labor would be free to slowly return to the old labor policies abandoned in favor of the popular moderate Labor party. Finally, the leaders of the Labor party would have secured their places in the history books for successfully altering the course of British politics. However, if New Labor fails to take advantage of the Conservative party's failure to respond to the new trends in voter behavior, they must regarded it as a squandered opportunity. ...read more.