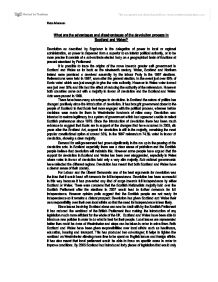 What are the advantages and disadvantages of the devolution process in Scotland and Wales?

What are the advantages and disadvantages of the devolution process in Scotland and Wales? Devolution as described by Bogdanor is the delegation of power to local or regional administration, so power is dispersed from a superior to an inferior political authority, or to be more precise it consists of a sub-ordinate elected body on a geographical basis of functions at present exercised by Parliament. It is possible to trace the origins of the move towards greater self- government in Scotland and Wales as far back as the nineteenth century. Wales, Scotland and Northern Ireland were promised a devolved assembly by the labour Party in the 1997 elections. Referendums were held in 1997, soon after the general election. In the event just over 60% of Scots voted which was just enough to give the vote authority. However in Wales voter turnout was just over 50% and this had the effect of reducing the authority of the referendum. However both countries came out with a majority in favour of devolution and the Scotland and Wales Acts were passed in 1998. There have been many advantages to devolution. In Scotland the nature of politics has changed positively since the introduction of devolution. It has brought government closer to the people of Scotland in that Scots feel more engaged with the political process, whereas before decisions were made for them in Westminster hundreds of miles away. ...read more.

Local issues are represented better than could be done at Westminster and steps can be taken in order to solve them. Both Scotland and Wales have been given responsibilities over local affairs such as healthcare, education, housing and transport. This has produced two advantages; it helps to lighten the workload on Westminster allowing more time to be spent on English issues and foreign affairs. It has also meant that local parliament would be able to focus on specific areas in order to improve conditions. By 2003 Scotland had introduced forty pieces of legislation that would only apply to Scotland, such as no tuition fees and free elderly care. Wales have also introduced new policies like the introduction of the Baccalaureate system of education as well as the banning of school league tables and SAT tests for seven year olds. This shows that devolution has had a positive effect and has lead to effective self-government. Also local people are more likely to accept new legislation if it has come from a more local source that understands their position better. Devolution has shown an increase in democracy as the Scottish and Welsh people have been given more say in matters that could affect them. The Scottish opposed a 'Beef on the bone ban' in 1999 that could have caused problems for Scottish farmers and the Welsh opposed the growth of GM crops because they feared the risk of cross pollination with their crops. ...read more.

There have been arguments about devolution in relation to it being seen by Scottish Nationalist as a stepping stone to independence. Before the UK general election the Conservative Party said that devolution would create a 'slippery slope' to Scottish independence and provide the SNPs with a route to power. John Major claimed that the Parliament could end '1000 years of British history'. The equally pro-Union Labour Party met these criticisms by claiming that devolution would fatally undermine the SNP, and remedy the long-felt desire of Scots for a measure of self-government. In practice the Tory fears have proved unfounded. Even after the SNPs gained a majority in the Scottish parliament after 2007 there has been no further surge towards independence. Support for the Scottish Nationalist Party has decreased as Scotland can now handle their own affairs and are over represented at Westminster. In Wales this issue is not as pressing because it is obvious that Wales could not cope independently so devolution has just allowed them to have some responsibility in handling their own affairs and reduced the workload at Westminster. To conclude, there are advantages and disadvantages to the devolution process in Scotland and Wales but mostly devolution has been effective. It has lead to a more effective government because Welsh and Scottish people have far more of a say in issues that concern them and it has decreased the support for independence in both countries. Kate Manson ...read more.