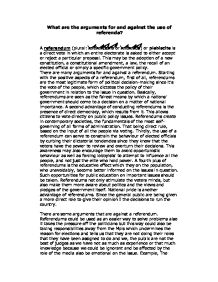 What are the arguments for and against the use of referenda

What are the arguments for and against the use of referenda? A referendum (plural: referendums or referenda) or plebiscite is a direct vote in which an entire electorate is asked to either accept or reject a particular proposal. This may be the adoption of a new constitution, a constitutional amendment, a law, the recall of an elected official or simply a specific government policy. There are many arguments for and against a referendum. Starting with the positive aspects of a referendum, first of all, referendums are the most legitimate form of political decision-making since it's the vote of the people, which dictates the policy of their government in relation to the issue in question. Basically, referendums are seen as the fairest means by which a nations' government should come to a decision on a matter of national importance. ...read more.

Such opportunities for public education on important issues should be taken. Referendums not only stimulate the voters minds, but also make them more aware about politics and the views and pledges of the government itself. National pride is another advantage of referendums. Since the general public are being given a more direct role to give their opinion I the decisions to run the country. There are some arguments that are against a referendum. Referendums could be used as an easier way to solve problems also it takes the pressure off the politicians but this way could also be taking responsibilities away from the Mp's which undermines the reason for elections and tells us that they are not doing their roles that they have been assigned to do and we, the public are not the best of judges as we have not as much as experience or ...read more.

sometimes the winning party does not get the majority, which is over fifty percent of the votes, but is the new government. Another disadvantage is that referendum takes more time and is expensive. The fact that the government sets the question of the referendum makes the fact less truth that referendum's results are people's voice whereas the government does not sets question on things which matter to them and could be a big change. In referendum many people do not turn up for the elections so the views of very few are known. Some opposition to the referendum has arisen from its use by dictators such as Hitler and Mussolini who, it is argued, used the plebiscite to clothe oppressive policies in a veneer of legitimacy. Hitler's use of the plebiscite is one reason why, since World War II, there has been no provision in Germany for the holding of referendums at the federal level. ...read more.