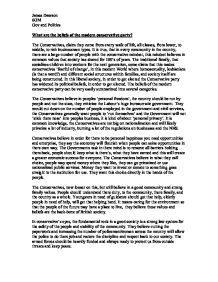 What are the beliefs of the modern conservative party

What are the beliefs of the modern conservative party? The Conservatives, claim they come from every walk of life, all classes, from lower, to middle, to rich businessmen types. It is true, that in every community in the country, there are a large number of people with the conservative mindset, this mindset believes in common values that society has shared for 100's of years. The traditional family, that socializes children into workers for the next generation, some claim that this makes conservatives 'fearful of change', in this modern World where homosexuality, lesbianism (is that a word?) and different social structures within families, and society itself are being constructed. ...read more.

Conservatives believe in order for there to be personal happiness you need opportunities and enterprise, they say the economy will flourish when people can seize opportunities in there own way. The Governments task in there mind is to remove all barriers holding them back, people should keep what is there's, what they have earned and this will create a greater economic success for everyone. The Conservatives believe in what they call choice, people may spend money where they like, they can go privatized or use nationalized public services. Money they want to invest or donate to something goes straight to the institution for use. ...read more.

They believe cutting the paperwork and increasing the number of policemen/women across the country will allow the police to do there job and restore the discipline and respect back to our society. The armed forces should be heavily funded and always ready to protect us from outside threats and keep peace. The Conservatives, believe the Monarchy, the parliament, courts of law, the church are all important sectors of our nation. They weave values into our society, and keep our countries identity. They are against the euro and not too keen on joining Europe, as our 'currency' represents our nationhood. If elected, a referendum will be held immediately on the issue of joining the European Union. As the Conservatives are very much against the European constitution. ?? ?? ?? ?? James Dawson 6GM Gov and Politics ...read more.