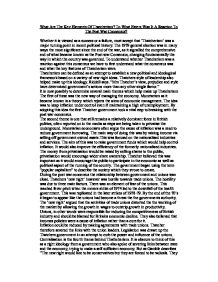 What Are The Key Elements Of Thatcherism? To What Extent Was It A Reaction To The Post War Consensus?

What Are The Key Elements Of Thatcherism? To What Extent Was It A Reaction To The Post War Concensus? Whether it is viewed as a success or a failure, most accept that 'Thatcherism' was a major turning point in recent political history. The 1979 general election was in many ways the most significant since the end of the war, as it signalled the comprehensive end of what became known as the Post-war Consensus, changing fundamentally the way in which the country was governed. To understand whether Thatcherism was a reaction against this consensus we have to first understand what the consensus was and what the key features of Thatcherism were. Thatcherism can be defined as an attempt to establish a new political and ideological framework based on a variety of new right ideas. Thatchers style of leadership also helped make up this ideology. Riddell says. "Mrs Thatcher's view, prejudice and style have determined government's actions more than any other single factor." It is now possibly to determine several main themes which help make up Thatcherism The first of these was the new way of managing the economy. Monetarism as it became known is a theory which rejects the aims of economic management. ...read more.

She aimed to achieve a status of 'what you see is what you get.' Thatcher and her group of advisors often look back to and referred back to the Victorian period for inspiration of ideas and policies. She saw the way the Victorians dealt with politics and crime and believed that it was up to the people to make a difference. Therefore to involve the people was the key. Certain similarities could be drawn between Thatcherism and Roosevelt's 'New Deal' in the 1930's in the US. In her autobiography, Thatcher comments: ' I never felt uneasy about praising "Victorian values"...The Victorians had a way of talking which summed up what we were now rediscovering - they distinguished between the deserving and undeserving poor. Both groups should be given help but it must be help of a very different kind if public spending is not just going to reinforce the dependency culture.' Thatcher was a strong believer of self help and individualism. She even went as far to admit that one of her many aims was to destroy socialism. She famously stated that there was "no such thing as society." As the above suggests, there was a moral dimension to Thatcherism and this informed many of the Thatcher governments policies. ...read more.

This did not mean they wanted to end the welfare system, but reduce levels of welfare and its tax costs. In reality they managed to change little - with so many receiving benefits, any reduction was bound to face great resentment. Total expenditure actually rose considerably due to the substantially greater number of people claiming unemployment benefit and pensions. Therefore while the Thatcher governments were far more opposed to the welfare state in ideology and rhetoric than any other pervious post-war government, they did little to decrease its dominance in the lives of people. Therefore the "Thatcher Revolution" can easily be seen as a reaction against the post-war consensus. It rejected many vital areas of it on principle and enacted policies which would have been unthinkable politically only years earlier in a government of either party. By the 1970s Britain's relative decline in the world since the war was painfully evident, and many turned to the consensus policies for a reason for this. The policies of Mrs Thatcher reversed many things taken for granted for over 30 years in an attempt to stop the rot which was seen as having crept into the nation's economy and society. ...read more.