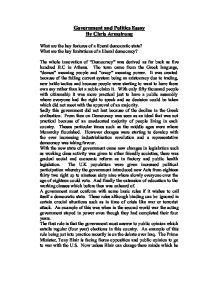 What are the key features of a liberal democratic state?

Government and Politics Essay By Chris Armstrong What are the key features of a liberal democratic state? What are the key limitations of a liberal democracy? The whole innovation of "Democracy" was derived as far back as five hundred B.C in Athens. The term came from the Greek language, "demos" meaning people and "cracy" meaning power. It was created because of the failing current system being an aristocracy due to trading, new battle tactics and because people were starting to want to have there own say rather than let a noble claim it. With only fifty thousand people with citizenship it was more practical just to have a public assembly where everyone had the right to speak and no decision could be taken which did not meet with the approval of an majority. Sadly this government did not last because of the decline in the Greek civilisation. From then on Democracy was seen as an ideal that was not practical because of an uneducated majority of people living in each country. Theses particular times such as the middle ages were where Monarchy flourished. ...read more.

The third is that there is to be no imposition of any creed, philosophy or ideology. The majority view of truth will vary and the government must remain representative to the public. If there was an imposition of any of the above the government would no longer be democratic but would be more Fundamentalist. Because Democracy is not perfect which will be explained in more detail below, there was major problems in Northern Ireland because of conflicting beliefs between Catholics and Protestants. As a result the IRA terrorist group was formed with left and right extremist groups attaching themselves to the cause (such as the more violent PIRA), its aim being to harass and blackmail the British government into releasing N.I back into the Republic. To stay a democracy a state must have checks and be under continual assessment. An example of this implementation was when Clinton was found to have been having an affair. Their was a lot of discussion within congress to whether or not this relationship affected the running of the U.S.A. ...read more.

The U.K's power is controlled by three factions each with a separate function. These are Legislature, Executive and the Judiciary. In Britain these three overlap each other like the Olympics logo. This represents that each has a part or say in what each other does. This would effectively prevent in the unlikely event that an person with extremist views would be able to implement them on their own. Although the Democracy sounds good on paper it is not a perfect way to run a state and does have flaws which in the past equated to major problems as in N.Ireland. Democracy has inherent contradictions such as the liberty of the individual and equality of the majority and also government by the majority versus minority rights. The latter applies to Northern Ireland where one third of the population was catholic and wished to be part of the Republic of Ireland and two thirds of the pop. was protestant and wanted to stay as the U.K. This ironic minority was not happy with the decisions of the majority being protestant and as a result formed the IRA. In conclusion a Democratic government despite its deficiencies remains to be the best way of running a country without the threat of arbitrary ruling and tyranny. ...read more.