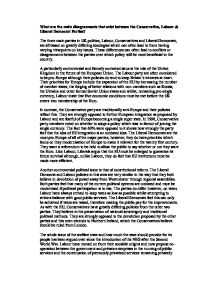 What are the main disagreements that exist between the Conservative, Labour &amp; Liberal Democrat Parties?

What are the main disagreements that exist between the Conservative, Labour & Liberal Democrat Parties? The three main parties in UK politics, Labour, Conservatives and Liberal Democrats, are all based on greatly differing ideologies which can often lead to them having varying viewpoints on key issues. These differences can often lead to conflicts or disagreements between the parties over which policy will be most beneficial to the country. A particularly controversial and fiercely contested issue is the role of the United Kingdom in the future of the European Union. The Labour party are often considered to be pro-Europe although their policies do tend to keep Britain's interests at heart. Their priorities for Europe include the expansion of the EU by increasing the number of member states, the forging of better relations with non-members such as Russia, the Ukraine and other former Soviet Union states and whilst, remaining pro-single currency, Labour insist that five economic conditions must be met before the UK enters into membership of the Euro. In contrast, the Conservative party are traditionally anti-Europe and their policies reflect this. ...read more.

The parties do differ however, on taxes. Labour have always strived to keep taxes as low as possible whilst attempting to strike a balance with good public services. The Liberal Democrats feel this can only be achieved if taxes are raised, therefore making the public pay for the improvements. As with the EU, Conservatives have greatly differing policies from the other two parties. They believe in the preservation of national sovereignty and traditional political methods. They are strongly opposed to the devolution proposed by the other parties and this even extends to Northern Ireland, which the Conservatives believe should be ruled from London. The whole issue of the welfare state and how much the state should provide for its people has been argued over since the introduction of the NHS after the Second World War. Labour have moved on from their socialist origins and now propose co-operation between the government and private enterprises in the running of public services and the continuation of previously privatised services remaining privately operated. The Labour party has always believed in equality of wealth and open access to necessary service and New Labour is no different, developing polices of urban regeneration, family benefits and job seeker's allowance. ...read more.

The Conservatives are strong capitalists and as such believe there should be very little state intervention in the economy as it invariably causes trouble. They also believe that a form of social insurance may be necessary to fund essential public services such as schools and the health services. In conclusion, it can be seen that the leading parties in UK politics almost invariably disagree when it comes to major issues such as welfare, the economy, the EU or constitutional reform. Overall the Liberal Democrats tend to live up their name with policies based on a more free and open society that everyone can enjoy. Labour have steadily moved closer to the centre of the political spectrum and their policies reflect this with their attempts to retain national sovereignty whilst attempting to make society a much more comfortable place. The Conservatives are currently undergoing a period of change which has seen them adopt policies and ideologies which move the party away from Thatcherite capitalism although their some of their policies have not always adequately shown this. It can be argued that such disagreement maker politics too adversarial and not very proactive. However, without these disagreements, governments would remain unchecked and therefore conflicts between parties do increase voter choice. T ...read more.