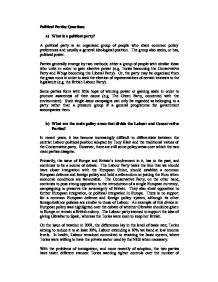 What are the main policy areas that divide the Labour and Conservative Parties?

Political Parties Questions a) What is a political party? A political party is an organised group of people who share common policy preferences and usually a general ideological position. The group also seeks, or has, political power. Parties generally emerge by two methods; either a group of people with similar ideas who unite in order to gain elective power (e.g. Tories becoming the Conservative Party and Whigs becoming the Liberal Party). Or, the party may be organised from the grass roots in order to seek the election of representatives of certain interests to the legislature (e.g. the British Labour Party). Some parties form with little hope of winning power or gaining seats in order to promote awareness of their cause (e.g. The Green Party, concerned with the environment). Such single-issue campaigns can only be regarded as belonging to a party rather than a pressure group if a general programme for government accompanies them. b) What are the main policy areas that divide the Labour and Conservative Parties? In recent years, it has become increasingly difficult to differentiate between the centrist Labour political position adopted by Tony Blair and the traditional values of the Conservative party. However, there are still some policy areas over which the two main parties disagree. ...read more.

c) To what extent has 'new' Labour broken with the party's traditional ideas and values? Towards the end of Labour's eighteen-year long run as the opposition, its organisation became heavily centralised in the interests of party discipline and policy cohesion, usually with more importance placed upon electoral requirements than party democracy. Having gained power using these techniques, it was inevitable that Labour would have to show strong, centralising trends in government. Indeed, Labour's association with centrally imposed discipline became almost obsessive. From the outset of the Labour parties existence, three aspects remain relevant in answering the question of the effect of 'new' Labour on traditional party ideas. Firstly, the party was a federation of groupings from a variety of socialist traditions, which encompassed a wide range of philosophies from both radical and moderate wings of the whole movement. Secondly, it was formed outside parliament and therefore its most important institutions are not parliamentary, but external party organs. And finally the influence of trade unions existed and played a dominating part in the values of Labour party members. 'New' Labour was a name adopted by Tony Blair in his campaign for the 1997 election, in an attempt to relaunch the tiring party, united under a set of new party principles and a new leader. ...read more.

Between 1992-7, there was a 20% decrease into the amount of Labour income from union donations, from 66% to 46%. The results of Neill's Report, published in October 1998, proposed more state aid to political parties, and also helped to curb the Tories traditional financial advantage by placing restrictions upon donations and national campaign spending. In conclusion it seems evident that although the traditional influence of trade unions on the Labour party has been weakened under Blair's leadership, the main ideas and values of the Labour party have remained intact. It is understandable that a party will have to alter its ideas with the changing times, and hence, in recent decades, with the emergence of a larger middle class and more affluent society, Labour would simply be unable to survive if its target voters remained the traditional working classes. Therefore, by restructuring the internal politics of his party, Blair has aimed to produce one that is more united, and able to appeal to a larger number of the electorate. In order to produce ideas and views which are relevant to today's society, some of the older ones have been required to be disregarded (specifically union links). It can be argued, however, that the 'facelift' of an ageing party is the only effective method to make it acceptable if it is failing. This may prove to be a process that the Conservative Party too, must now resort to. ...read more.