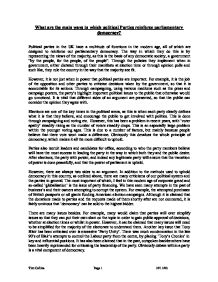 What are the main ways in which political Parties reinforce parliamentary democracy?

What are the main ways in which political Parties reinforce parliamentary democracy? Political parties in the UK have a multitude of functions in the modern age, all of which are designed to reinforce our parliamentary democracy. The way in which they do this is by representing the views of the majority, as this is the basis of any democratic society, a government "by the people, for the people, of the people". Through the policies they implement when in government, either dictated through their manifesto at election time or through opinion polls and such like, they rule the country in the way that the majority see fit. However, it is not just when in power that political parties are important. ...read more.

This is an especially large problem within the younger voting ages. This is due to a number of factors, but mainly because people believe that there vote wont make a difference. Obviously this devalues the whole principle of democracy, which makes it all the more difficult to uphold. Parties also recruit leaders and candidates for office, according to who the party members believe will have the most success in leading the party in the way in which both they and the public desire. After elections, the party with power, and indeed any legitimate party will ensure that the transition of power is done peacefully, and that the power of parliament is upheld. ...read more.

There are many issues besides. For example, many would claim that parties will over simplify issues so that they can put their own slant on the topic in order to gain public approval of decisions, whether at election times or whilst in power. However, it can be claimed that many issues will need to be simplified for the majority of the electorate to understand them. Another key issue that Tony Blair has been criticised over is excessive 'Party Unity'. There was much condemnation in the late 90's of Blair's attempts to control the Labour party from the centre, by placing 'Tony's Cronies' in key and influential positions. It has also been claimed that in the past, outspoken backbenchers have been heavily reprimanded for criticising the leadership of the party. Obviously debate within a party is a vital component of democracy. Tim Collins Page 1 10/11/02 ...read more.