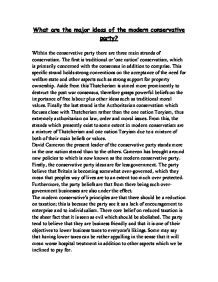 What are the major ideas of the modern conservative party?

What are the major ideas of the modern conservative party? Within the conservative party there are three main strands of conservatism. The first is traditional or 'one nation' conservatism, which is primarily concerned with the consensus in addition to comprise. This specific strand holds strong conventions on the acceptance of the need for welfare state and other aspects such as strong support for property ownership. Aside from this Thatcherism is aimed more prominently to destruct the post war consensus, therefore grasps powerful beliefs on the importance of free labour plus other ideas such as traditional moral values. Finally the last strand is the Authoritarian conservatism which focuses close with Thatcherism rather than the one nation Toryism, thus extremely authoritarian on law, order and moral issues. ...read more.

Firstly, the conservative party ideas are for less government. The party believe that Britain is becoming somewhat over-governed, which they mean that peoples way of lives are to an extent too much over protected. Furthermore, the party beliefs are that from there being such over-government businesses are also under the effect. The modern conservative's principles are that there should be a reduction on taxation; this is because the party see it as a lack of encouragement to enterprise and to individualism. There core belief on reduced taxation is the sheer fact that it is seen as evil which should be abolished. The party tend to believe that they are business friendly and that it is one of their objectives to lower business taxes to everyone's likings. ...read more.

crime service; therefore many people are prone to be against due to them more for it to be invested in such things like the NHS. Moving away from this, David Cameron has set is sites on more notorious issues such as the environment. He believes in that we should acquire social justice, economic competitiveness and other things like improvement in public services. The conservatives believe that we should aim to achieve conquering such things which may affect us in the ling run i.e. global poverty. To conclude, the modern conservatism under David Cameron has a variety of ideas including law, environmental issues and other things like taxes. Although, it can be said that still Thatcherism is a major part of the party and that conservatives still do think of individuals. ...read more.