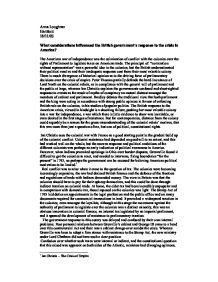 What considerations influenced the British government's response to the crisis in America?

Anna Loughran Hertford 18/11/03 What considerations influenced the British government's response to the crisis in America? The American war of independence was the culmination of conflict with the colonies over the rights of Parliament to legislate taxes on American trade. The principal of "no taxation without representation" was a powerful idea in the colonies, but the British underestimated their political resolve and their inadequate response cost them their most valuable colony. There is much divergence of historical opinion as to the driving force of parliamentary decisions over the crisis of empire. Peter Thomas partially defends the hard-line stance of Lord North on the colonial rebels, as in compliance with the general will of parliament and the public at large, whereas Ian Chrisitie explains the governments confused and short-sighted response to events as the result of myths of conspiracy an mutual distrust amongst the members of cabinet and parliament. Bradley debates the traditional view that both parliament and the king were acting in accordance with strong public opinion in favour of enforcing British rule on the colonies, in his studies of popular politics. ...read more.

The British needed the colonies to sustain wealth and status as a major world power, and there was a real fear that losing them would mean political and economic ruin, but, in light of their importance, the government shows little attempt to resolve the root of the issue beyond controlling the individual outbreaks of resistance. An explanation for this could be that without hindsight, and with the obvious problem of distance, the government was unable to see the gravity of the problem, believing it to be merely an issue of tax that the colonies would eventually succumb to. There is also much evidence to suggest that the government was under the mistaken impression that resistance was confined to isolated parts of the colonies where incidents, such as the Boston Tea Party, erupted among the undisciplined masses and were unaware of the growing organisation of resistance and the unity of the colonies in their common cause to obtain rights to govern themselves. Chrisitie proposes another theory that could help explain parliament's reaction and lack of resolve.2 He argues that myths of a double cabinet of divided views surrounded the Rockingham ministry, at their height in the late 1760s, and undermined their political confidence in governing. ...read more.

Parliament was thus able to ignore petitions for peace, arguing that this was a trade issue. Realisation of the gravity of the crisis had called more ministers to parliament, in the final stages before war, just as it had called more voters to the ballot box, but increased interest seems to have had little bearing on policy. Thomas argues that North was still working on the assumption that the root cause of the American dispute was taxation right up to the brink of war. He claims that the official policy of 1775 bore North's personal stamp and that his faulty analysis of the crisis, his bellicose colleagues and a parliament adamant on asserting its rights was what cost his ministry the American colonies. He offered the colonies a total repeal of all taxes as a last ditch attempt to avoid the escalation into full-scale civil war, but he refused to compromise on the question of British authority. Right up until the outbreak of war, the British response to American demands was confused, and confusion still surrounds the historiography of the workings of parliament and the public opinion. This was the first colonial crisis on this scale that any European power had had to face and the government was clearly unable to deal with this new situation adequately. ...read more.