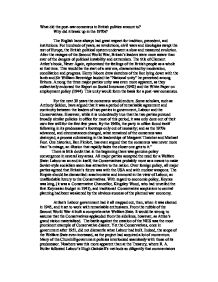 What did the post-war consensus in British politics amount to? Why did it break up in the 1970s?

What did the post-war consensus in British politics amount to? Why did it break up in the 1970s? The English have always had great respect for tradition, precedent, and institutions. For hundreds of years, as revolutions, civil wars and ideologies swept the rest of Europe, the British political system underwent a slow and measured evolution. After the ravages of the Second World War, Britain's leaders were more aware than ever of the dangers of political instability and extremism. The title of Clement Attlee's book, Never Again, epitomised the feelings of the British people as a whole at that time. This would be the start of a new era, characterised by moderation, conciliation and progress. Henry Moore drew sketches of the lion lying down with the lamb and Sir William Beveridge lauded the "National unity" he perceived among Britons. Among the three major parties unity was even more apparent, as they collectively endorsed the Report on Social Insurance (1942) and the White Paper on employment policy (1944). This unity would form the basis for a post-war consensus. For the next 30 years the consensus would endure. Some scholars, such as Anthony Seldon, have argued that it was a period of remarkable agreement and continuity between the leaders of two parties in government, Labour and the Conservatives. ...read more.

One year later, the Cabinet caused the resignation of Peter Thorneycroft by refusing to accept the Treasury's monetarist, anti-consensual policies. By the 1960s, however, British politics had shifted to an adversarial style. In opposition until 1964, the Labour party began to call for radical change, such as full nuclear disarmament in 1960 - a clear departure from the consensus. Marxists began to achieve prominence in the party. The Conservatives too began to drift away from the centre, for instance with the 1962 Commonwealth Immigrant Act. The return of Sir Oswald Mosley and the rise of Enoch Powell were symptomatic of the slow death of consensual politics. A consensus of sorts did endure until the 1970s, but it was no longer the result of agreement and co-operation between the Left and the Right. The ageing statesmen, veterans of the War, had been replaced, and their obsession with the stability of the nation was considered old hat. Books with titles like The Stagnant Society and a whole series by Penguin entitled What Is Wrong With Britain are testament to a general change of attitude. Harold Wilson and Ted Heath were thought of as a new breed. If a consensus endured, therefore, it was due to factors other than their own wishes. Prime among these was the need by both parties to capture and to keep the votes of a generally moderate electorate. ...read more.

In the Conservatives too, Heath was replaced by Margaret Thatcher in 1975 - she needs no introduction. It was now obvious that Keynesian economics had failed: Britain's economic health had declined, relative to the rest of the Western world, non-stop since the War. The 70s, the years of "stagflation" (stagnation and inflation), discredited social democracy. Official Labour policy veered leftwards; the Conservative party went right, espousing the monetarist system of Milton Friedman and F. A. Hayek. The Winter of Discontent in 1978-9 and the election of Thatcher buried any remaining notion of consensus. A glance back at the post-war years gives an impression of remarkable co-operation and continuity between the various governments of the time. But it is dangerous to talk of a single "consensus" lasting thirty years. As Rodney Lowe has noted, "its nature was constantly evolving." The word consensus, misleadingly, conveys a sense of mutual and bona fide assent. While this was the case in the period immediately after the end of the Second World War, it does not reflect the politics of the 1960s and 1970s, which were adversarial in style. Successive governments may have pursued similar policies while in office, but rarely did they will it. The 1960s and 70s are remembered for great social change (and dislocation) and industrial unrest: hardly the stuff of cheerful agreement. There was a consensus between successive governments in the 60s and 70s; but it was limited to the policies they pursued in office. ...read more.