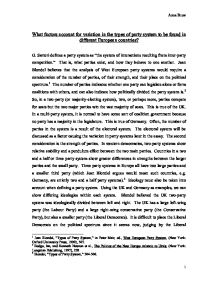 What factors account for variation in the types of party system to be found in different European countries?

What factors account for variation in the types of party system to be found in different European countries? G. Sartori defines a party system as "the system of interactions resulting from inter-party competition." That is, what parties exist, and how they behave to one another. Jean Blondel believes that the analysis of West European party systems would require a consideration of the number of parties, of their strength, and their place on the political spectrum.1 The number of parties indicates whether one party can legislate alone or form coalitions with others, and can also indicate how politically divided the party system is.2 So, in a two-party (or majority-electing system), two, or perhaps more, parties compete for seats but the two major parties win the vast majority of seats. This is true of the UK. In a multi-party system, it is normal to have some sort of coalition government because no party has a majority in the legislature. This is true of Germany. Often, the number of parties in the system is a result of the electoral system. The electoral system will be discussed as a factor causing the variation in party systems later in the essay. The second consideration is the strength of parties. In western democracies, two-party systems show relative stability and a pendulum effect between the two main parties. ...read more.

Also in the UK, there tended to be a north-south divide on the basis of class, although the distinction is not so clear in the present day. In Britain post-World War II, there was evidently working-class and middle-class. Today, due to the rise in the service sector and self-employment, and the decline in the manufacturing industry, there is a rapidly expanding middle-class.7 Despite the evolution of the traditional "old" Labour Party, which mainly represented the working class, into a bigger catch-all party, it can be argued that voting patterns in the UK are still based for many on social class. However, it can be argued that there is weakening partisanship with regard to the two main parties (Labour and Conservative), due to dissatisfaction and the opinion that there is little difference between them.8 In Germany, both the CDU/CSU and SPD are increasingly centrist and aim to appeal to the wider electorate. This has not always been the case, as the SPD was officially a socialist worker's party until 1959. The long period of CDU/CSU dominance during the post-war "economic miracle" in West Germany made it difficult for the SPD, who were officially anti-capitalism, to gain votes, and they were forced to move towards the centre after dropping their Marxist character in 1959. ...read more.

For example, the class cleavage is still fairly significant in Britain, and this is reflected by the establishment of the Labour Party (traditionally the party of the working class) in the early twentieth century, and the development of the Tory Party into the Conservative Party, which traditionally represented the upper and increasingly middle class voters. Also in Germany, the SPD remains the party of the majority of the working class, whereas the CDU/CSU enjoys more support from the middle classes. In the UK, this ideological division and the first past the post electoral system has led to the development of a two-party system. In Germany, it is more the electoral system that has affected the party system, because its additional member system (a proportional representation system) means that seats are allocated according to votes. As is often the case with a proportional system, it is very hard in Germany to gain an overall majority. It has only happened once, when the CDU/CSU managed it in 1957.13 Electoral systems, majoritarian and proportional, do account for much of the variation in party systems across western Europe. Cleavages can be quite influential but they do also lose their saliency, and this, along with changes in the nature of the electorate and social values in each country, means that party systems in West European countries vary. ...read more.