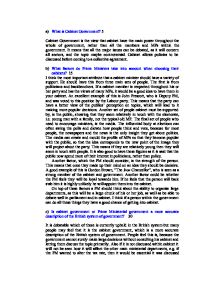 What factors do Prime Ministers take into account when choosing their cabinets?

a) What is Cabinet Government? 5 Cabinet Government is the view that cabinet have the main power throughout the whole of government, rather than all the members and MPs within the government. It means that all the major issues can be debated, as it will concern all sectors, and the topic maybe controversial. Cabinet allows policies to be discussed before coming to a collective agreement. b) What factors do Prime Ministers take into account when choosing their cabinets? 15 I think the most important attribute that a cabinet minister should have a variety of support. He should have this from three main sets of people. The first is from politicians and backbenchers. If a cabinet member is respected throughout his or her party and has the views of many MPs, it would be a good idea to have them in your cabinet. An excellent example of this is John Prescott, who is Deputy PM, and was voted to this position by the Labour party. This means that the party can have a better view of the publics' perception on topics, which will lead to it making more popular decisions. ...read more.

c) Is cabinet government or Prime Ministerial government a more accurate description of the British system of government? 30 It is debatable which of these is currently upheld in the British system but many people may feel that it is the cabinet government, which is a more accurate description of the British system of government. People feel this is, because the government cannot surely make large decisions without consulting his cabinet and letting them discuss the topic primarily. Also if it is not discussed within cabinet it will not be seen how it will affect the other main ministerial departments, e.g. if the PM wanted to alter the tax rate, then it would be essential it was discussed within cabinet as a change in tax would have a knock on effect on each individual department, such as the Department of Health and the Department of Education. Also if a topic is discussed within the rest of cabinet, then it means the ideas of about 20 people can be brought up, rather than just the individual PM. I also think it means that if the idea goes completely wrong then the blame can be spread throughout the government, rather than pin-pointing it back to an individual. ...read more.

This was not discussed within cabinet, with the exception of Gordon Brown, the Chancellor of the Exchequer. I think that a topic of this size should have been discussed within cabinet first, as I personally believe it is a highly important matter, as it will decide on peoples spending patterns. i.e. if interest rates are high then people will spend less of their disposable income, and therefore the government will receive less revenue via taxes. This will in turn affect each government sector, as less funding will be available. I personally think that the British political system is mainly Cabinet Government. The main reason I can think of is because the PM does not have enough time to carry out all of his roles, and then be able to know enough about all other issues, so much so that he doesn't need to consult his cabinet at all. Also I feel that if the PM did not consult his cabinet, and when he did he just over ruled their thoughts, then there would be a danger of the system becoming a dictatorship. I do however feel that in some situations a Prime Ministerial government can be beneficial. This could be when a decisive decision is needed. ...read more.