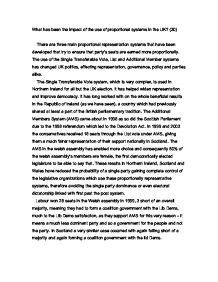 What has been the impact of the use of proportional systems in the UK?

What has been the impact of the use of proportional systems in the UK? (30) There are three main proportional representation systems that have been developed that try to ensure that party's seats are earned more proportionally. The use of the Single Transferable Vote, List and Additional Member systems has changed UK politics, effecting representation, governance, policy and parties alike. The Single Transferable Vote system, which is very complex, is used in Northern Ireland for all but the UK election. It has helped widen representation and improve democracy. It has long worked with on the whole beneficial results in the Republic of Ireland (as we have seen), a country which had previously shared at least a part of the British parliamentary tradition. ...read more.

Labour won 28 seats in the Welsh assembly in 1999, 3 short of an overall majority, meaning they had to form a coalition government with the Lib Dems, much to the Lib Dems satisfaction, as they support AMS for this very reason - it means a much less dominant party and so a government for the people and not the party. In Scotland a very similar case occurred with again falling short of a majority and again forming a coalition government with the lid Dems. The use of AMS & the resultant coalitions in Scotland & in Wales 1999-2003 has led to a degree of policy variance within the various parts of the UK. In Scotland the Labour-Liberal Democrat coalition has abolished up-front tuition fees, introduced free nursing care of the elderly, banned fox hunting & repealed Clause 28, none of which have occurred in England. ...read more.

Proportional systems such as AMS, STV & the regional List system allow smaller parties to be fairly represented & achieve their first seats in the various legislatures. Smaller parties such as the Greens have achieved their first seats securing 2 seats in the 1999 European elections under the regional List & 7 seats under AMS in the 2003 Scottish Parliamentary elections. UKIP also achieved 3 seats in the 1999 EU elections & the Scottish Parliament now has 4 independents MSPs & 6 Scottish Socialist Party representatives. Therefore the use of more proportional electoral systems in the UK has had a mixed impact on politics in the UK. The use of AMS, the regional List & STV have made politics more varied, improved representation & democracy, successfully introducing coalition & consensus politics into the UK. In Northern Ireland STV has worked since 1973, showing it has stood the test of time. ...read more.