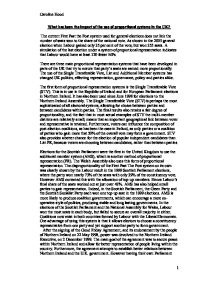 What has been the impact of the use of proportional systems in the UK?

What has been the impact of the use of proportional systems in the UK? The current First Past the Post system used for general elections does not link the number of seats won to the share of the national vote. As shown in the 2005 general election when Labour gained only 35 per cent of the vote, but won 355 seats. A simulation of the last election under a system of proportional representation indicates that Labour would have at least 120 fewer MPs. There are three main proportional representation systems that have been developed in parts of the UK that try to ensure that party's seats are earned more proportionally. The use of the Single Transferable Vote, List and Additional Member systems has changed UK politics, effecting representation, governance, policy and parties alike. The first form of proportional representation systems is the Single Transferable Vote (STV). This is in use in the Republic of Ireland and for European Parliament elections in Northern Ireland. It has also been used since June 1998 for elections to the Northern Ireland Assembly. ...read more.

However AMS corrected this with the allocation of top-up members. Hence Labour's final share of the seats worked out at just over 43%. AMS has also helped small parties to gain representation. Indeed, in the Scottish Parliament, the Green Party and the Scottish Socialist Party each won one top-up seat in the 1999 elections. AMS is more likely to produce coalition governments, which can encourage a more co-operative style of politics, producing stable and long lasting governments. In the elections of the Scottish Parliament and the National Assembly for Wales, Labour won the most seats in each body, but failed to secure an overall majority in either. Coalitions now exist in both countries formed by Labour with the Liberal Democrats. One advantage of using this system is that it allows electors to choose a constituency representative from one party and yet support another party to form government. After the signing of the Good Friday Agreement, and its endorsement by the people of Northern Ireland on 22 May 1998, power was devolved to the Northern Ireland Executive, on 2 December 1999. ...read more.

It is a system close to AV, and is likely to produce a very similar result. As such it has had a very similar impact on the voting systems in the UK. Its essential difference from AV is that it allows the voter to exercise only a second choice, and not a third, a fourth or even a fifth one, and thus avoids weak choices from occasionally illegitimately influencing the result. In conclusion it would seem that the general impact of proportional representation in the UK would be a positive one as it has created stronger constituency links and creates governments based on what the people really want. The current UK situation would not have happened if all parts of it had continued to use the First Past The Post system. Proportional representation has meant that people's opinions are now being heard and parties are being assigned seats in accordance to the number of votes that they have gained. The argument is now one of whether the rest of the UK (i.e England) should now also reform its electoral system thus making it more representative and fair. ?? ?? ?? ?? Caroline Hood 1 ...read more.