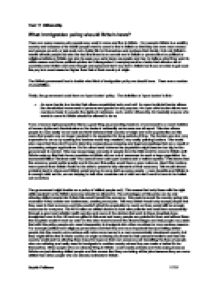 Year 11 Citizenship What immigration policy should Britain have? There are many reasons why people may want to come and live in Britain. For example Britain is a wealthy country and because of its wealth people want to come to live in Britain so that they can earn more money and escape poverty or just seek out a better life for themselves and perhaps their family. Not only Britain's wealth attracts people but also the fact that there is no current war in Britain or persecution for political or religious beliefs so Britain can also be seen as a safe haven as people are free to believe what they want to, within reason and there political opinion isn't disregarded. Unemployment is a factor that effects a lot of countries even Britain and even though unemployment isn't very low in Britain but if you are able to get a job the pay is in most cases far higher than that of their country of origin. The British government has to decide what kind of immigration policy we should have. There are a number of possibilities. Firstly, the government could have an 'open border' policy. The definition of 'open border' is this - * An open border is a border that allows unrestricted entry and exit. An open territorial border allows the unrestricted movement of persons and goods for any purpose. ...read more.

Other people who are already living in Britain could create protests and riots saying because Britain are just allowing skilled people and this means that they are taking all the jobs because they are more skilled than other people who are already residents in Britain. Another possibility is to adopt a policy of 'one in, one out'. This means that the number of people coming into the country should broadly equal the number of people who leave the country. The advantages of this policy are that the population of the country wouldn't change from immigrants coming into the count instead they would come in making no difference to the population of the country. This would limit the amount of immigrants coming into the country which means that less paperwork would have to be carried out to make the migrant a proper UK citizen because there is less immigrants coming into the UK, saving a lot of money that goes into making migrants official citizens. However the problem is that far more people want to come into the country than want to leave so people who want to immigrate would have to wait a long time perhaps to get into Britain. People may also who have moved out of Britain for a particular reason may have relatives who live back in Britain so if they lose their job or reason why they moved to that other country in the first place might not exist anymore so they wish ...read more.

However in my opinion if all the other countries were how they should be people wouldn't need to immigrate and in most cases would be happy to stay in their own country because if poverty, religious persecution and political persecution didn't exist the world would be a different place how it should be and immigration policies wouldn't be as vital, people could be safe and happy in their own country. The world will never be like that however so the government has to pay thousands of pounds if not millions on immigration. That is why Britain has to open its doors to immigrants so instead of letting them suffer, Britain can allow them to have a better life however we can't protect everyone and thousands of migrants have to be turned away. The 'one in, one out' policy allows for that because it let's a few migrants in while takes into account the welfare of others already living in Britain because if too many immigrants were allowed in the country would get more into debt and eventually food sources would slowly run out which would end up in poor welfare for the immigrants and the people already living in Britain it would benefit no one. This policy allows immigrants gradually in to settle in Britain's society. This is why I feel this policy would be the best for the British government to choose. Sophie Pattinson 11T11 ...read more.