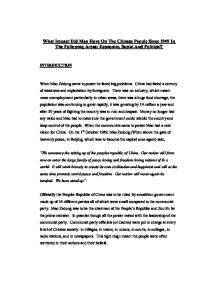 What Impact Did Mao Have On The Chinese People Since 1949 In The Following Areas: Economic, Social And Political?

What Impact Did Mao Have On The Chinese People Since 1949 In The Following Areas: Economic, Social And Political? INTRODUCTION When Mao Zedong came to power he faced big problems. China had faced a century of weakness and exploitation by foreigners. There was no industry, which meant mass unemployment particularly in urban areas, there was a huge food shortage, the population was continuing to grow rapidly, it was growing by 14 million a year and after 50 years of fighting the country was in ruin and despair. Money no longer had any value and Mao had to make sure the government could rebuild the country and keep control of the people. When the communists came to power Mao had a new vision for China. On the 1st October 1949, Mao Zedong (When above the gate of heavenly peace, in Beijing, which was to become the capital once again) said, "We announce the setting up of the peoples republic of China. Our nation will from now on enter the large family of peace loving and freedom loving nations of the world. It will work bravely to create its own civilisation and happiness and will at the same time promote world peace and freedom. Our nation will never again be insulted. We have stood up". Officially the Peoples Republic of China was to be ruled by a coalition government made up of 14 different parties all of which were small compared to the communist party. ...read more.

After China entered the Korean War, the initial changes in Chinese domestic policies gave way to a massive campaign against the "enemies of the state," actual and potential. These enemies consisted of "war criminals, traitors, bureaucratic capitalists, and counter revolutionaries." The campaign was combined with party-sponsored trials attended by huge numbers of people. The major targets in this drive were foreigners and Christian missionaries who were branded as United States agents at these mass trials. A reform campaign requiring self-criticisms and public confessions by university faculty members, scientists, and other professional workers was given wide publicity. Artists and writers were soon the objects of similar treatment for failing to heed Mao's words that culture and literature must reflect interests of the working people. These campaigns were accompanied in 1950 by the three anti's ("san fan") movement. It was directed against the evils of "corruption, waste, and bureaucracy"; its real aim was to eliminate any enemies of communism. It led to raids, public trials and even executions for those viewed as willing to harm and destroy the country " In the course of this campaign the party claimed to have uncovered a well-organized attempt by businessmen and industrialists to corrupt party and government officials, this led to businessmen being weeded out for punishment many just 'disappeared'. This charge was enlarged into an assault on the bourgeoisie as a whole. ...read more.

When the five anti's campaign began it concentrated on tax evasion, bribery, fraud, spying, and stealing of state assets. The guilty were sent for 're-education'. Politically the communists felt that china was stabilizing now that the evil vices had been removed. In 1956 Mao decided to allow people to let of steam by saying what they wanted about the communist party, its policies and its leaders. He said "It is only by using discussion, criticism and reasoning that we can really foster correct ideas, overcome wrong ideas and really settle issues." Putting it another way, he quoted from ancient Chinese history saying "Let a hundred flowers bloom" Meaning that free speech and argument were healthy and should be encouraged. For a while people spoke more freely than Mao would have liked. People were not just complaining about leaders and policies they were challenging the ideals of communism. In June 1957 Mao Zedong cracked down on his critics. Many were arrested and sent away to camps in the countryside for 'thought reform' others were sacked from their jobs. People were forbidden to speak freely and the press were once again censored. The 'Hundred Flowers' withered as rapidly as they had bloomed. Many people believed the real reason for the Hundred Flower Campaign, was for Mao to bait his enemies in to showing themselves, where they could be arrested. ...read more.