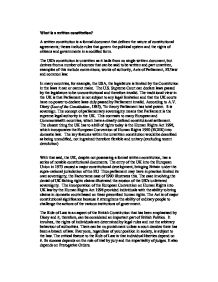 What is a written constitution?

What is a written constitution? A written constitution is a formal document that defines the nature of constitutional agreements; theses include rules that govern the political system and the rights of citizens and governments in a codified form. The UK's constitution is unwritten as it hails from no single written document, but derives from a number of sources that can be said to be written and part unwritten, examples of this include conventions, works of authority, Acts of Parliament, EU law and common law. In many countries, for example, the USA, the legislature is limited by the Constitution in the laws it can or cannot make. The U.S. Supreme Court can declare laws passed by the legislature to be unconstitutional and therefore invalid. The traditional view in the UK is that Parliament is not subject to any legal limitation and that the UK courts have no power to declare laws duly passed by Parliament invalid. According to A.V. Dicey (Law of the Constitution, 1885), "In theory Parliament has total power. ...read more.

The Act is of major constitutional significance because it strengthens the ability of ordinary people to challenge the actions of the various institutions of government. The Rule of Law is an aspect of the British Constitution that has been emphasised by Dicey and it, therefore, can be considered an important part of British Politics. It involves, the rights of individuals are determined by legal rules and not the arbitrary behaviour of authorities. There can be no punishment unless a court decides there has been a breach of law. Everyone, regardless of your position in society, is subject to the law. The critical feature to the Rule of Law is that individual liberties depend on it. Its success depends on the role of trial by jury and the impartiality of judges. It also depends on Prerogative Orders. Supporters of a written and clearly defined constitution believe that as society has had its liberties more and more encroached on by central government, the Rule of Law is more important now than ever. They claim that central government has sought and seeks to undermine the three basic tenets of Dicey's code with an increase in things such as: the activities of the Secret Service (especially after September 11th) ...read more.

It has changed and evolved and still continues to do so. Judicial issues may arise within a written constitution, as it has to be relatively vague to allow it to evolve as society evolves. This would mean that the state would be constantly open to judicial interpretation. This would become a problem for a number of reasons: Judges are unrepresentative of the public; as such they are unlikely to represent minority groups or activists. Judges are unaccountable and do not have to answer to Parliament or the public and since they are not elected is would not be reasonable that they would be able to overrule an elected Parliament. As such, the core controversy around the notion of a written constitution has been its potential to act as a brake on the democratic supremacy of Parliament. Some believe that the notion of an unelected judicial branch questioning the sovereignty of Parliament is fundamentally opposed to the notion of representative democracy. This alone would suggest that the current system provides strong and effective government with accountability and supreme authority. ?? ?? ?? ?? ...read more.