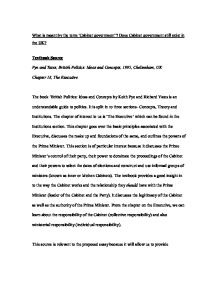 What is meant by the term 'Cabinet government'? Does Cabinet government still exist in the UK? Textbook Source Pye and Yates, British Politics: Ideas and Concepts, 1995, Cheltenham, UK Chapter 18, The Executive The book 'British Politics: Ideas and Concepts by Keith Pye and Richard Yates is an understandable guide to politics. It is split in to three sections- Concepts, Theory and Institutions. The chapter of interest to us is 'The Executive' which can be found in the Institutions section. This chapter goes over the basic principles associated with the Executive, discusses the make up and foundations of the same, and outlines the powers of the Prime Minister. This section is of particular interest because it discusses the Prime Minister's control of their party, their power to dominate the proceedings of the Cabinet and their powers to select the dates of elections and construct and use informal groups of ministers (known as inner or kitchen Cabinets). ...read more.

This source is relevant to the proposed essay title because it provides a view of whether or not Cabinet government exists in the UK, as well as giving a reference to find more helpful information (Lord Butler's report). It also offers solutions to problems which may exist and cause Cabinet government to be ignored. This source goes some way to providing us with a balanced view of the argument. Newspaper Source Jones, George: Political Editor, The Daily Telegraph, Issue No. 46,705 Saturday 6th August 2005, Front page. Surprisingly for a right-wing, Conservative newspaper, this source is actually in support of Tony Blair and his "curb on human rights in the 'war on terror'." The article outlines how Tony Blair and his Cabinet plan to regain the right of the elected Government to deport any foreigners believed to pose a threat to national security. It also provides the reader with information on the current European Union laws and regulations regarding the deportation of people to countries where they may face torture or ill-treatment on their return. ...read more.

He suggests that the period between 1962 and October 1964 was the 'fag-end' of a regime which is scarcely recognisable today and that since October 1964, the changes in the running of Parliament and the type of government enforced has been huge. Dalyell stresses that accountability of ministers as we know it today was in its infancy back then and, while ministers were given a fairly free rein, they were kept in check by bodies such as the civil service and Select Committees. This meant that the idea of Cabinet government was in full force. This source is relevant to the proposed essay title because it gives historical and first hand evidence to add to the argument to suggest that Cabinet government does not exist in Britain. By providing some historical basis for the argument, it becomes further legitimised and gives more authority to what is being said. It also suggests an outlet for further information in the form of the Hansard Reports. WORD COUNT: 1,025 ...read more.