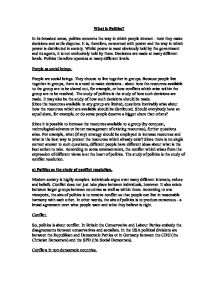 What is Politics? In its broadest sense, politics concerns the way in which people interact - how they make decisions and settle disputes. It is, therefore, concerned with power and the way in which power is distributed in society. Whilst power is most obviously held by the government and its agents, it is not exclusively held by them. Decisions are made at many different levels. Politics therefore operates at many different levels. People as social beings. People are social beings. They choose to live together in groups. Because people live together in groups, there is a need to make decisions - about how the resources available to the group are to be shared out, for example, or how conflicts which arise within the group are to be resolved. The study of politics is the study of how such decisions are made. It may also be the study of how such decisions should be made. Since the resources available to any group are limited, questions inevitably arise about how the resources which are available should be distributed. Should everybody have an equal share, for example, or do some people deserve a bigger share than others? Since it is possible to increase the resources available to a group (by conquest, technological advance or better management of existing resources), further questions arise. For example, what (if any) strategy should be employed to increase resources and what is the best way to protect the resources which already exist? Since there is no single correct answer to such questions, different people have different ideas about what is the best action to take. According to some commentators, the conflict which arises from the expression of different views is at the heart of politics. The study of politics is the study of conflict resolution. a) Politics as the study of conflict resolution. Modern society is highly complex. individuals argue over many different interests, values and beliefs. ...read more.

An individual is considered charismatic when the strength of his or her personality is so great that people will follow their lead. Charismatic leaders have included Winston Churchill, Adolf Hitler and Margaret Thatcher. Overlap. Weber's typology should be handled with care because it is difficult to separate clearly different types of authority as there is considerable overlap. Similarly, there is a degree of blurring between the different types of power. Most governments, for example, rely on people to obey the law due to the government's authority, however, they must also be able to turn to coercion to threaten those who do not respect the laws or the government's authority with certain sanctions. Consent and legitimacy. In democratic countries a governments authority is based on elections. Provided those elections are free and competitive (freedom of speech, a number of parties from which to choose, a secret ballot, etc.) they allow the people to give their consent to government. This means that the people are governed in a manner and by a government of which they approve. Consent outside democracy. However, consent need not be achieved solely through elections. Many regimes that would not be considered democratic have tried to show that they have the consent of the people through demonstrations, marches and public shows of support. The Nazis in Germany in the 1930s tried to show their public support through mass rallies, and public support in Cuba for Fidel Castro has been shown by 'spontaneous' public demonstrations. Legitimacy. However, in western states, elections are the usual means of gaining consent. An elected government is considered to be legitimate, in that it is the rightful government. From its legitimacy comes its authority. Why is this important? The link between legitimacy and authority is extremely important in representative democracies. The fact that the people elect representatives makes the government legitimate. Those representatives then make the laws that will govern people lives. ...read more.

C. The Marxist model. Like most other liberal democracies, the UK is a capitalist country. The vast bulk of its wealth is owned by individuals rather than by the state. In simple terms, those who own and control the wealth are capitalists whilst the people they employ are workers. Although the capitalists are fewer in number than the workers, they tend to acquire political as well as economic power. Marxists are fundamentally opposed to the capitalist system. They argue that it is responsible for the inequalities in British society and the unevenness of the distribution of power. Marxist studies of the British political system are, therefore, (unlike some pluralist or elitist studies) necessarily critical of the system. Contrasts with the other models. The Marxist model is closer to the elite model than to the pluralist model. Like elite theorists, Marxists argue that a cohesive political elite exists in the UK. Also like some elite theorists, Marxists agree that the democratic institutions in the UK are a sham. It is not, therefore, in their conclusions that elite theorists and Marxists disagree. Rather, it is in the arguments they use to reach these conclusions. Marxists argue that the elite - the ruling class - has power because it controls and owns capital. The source of power lies, therefore, in the economic infrastructure (in the way in which the economic system works). Elite theorists, on the other hand, argue that the explanation for the domination of elites is psychological. Revolution. Marxists are particularly critical of the pluralist idea that the state is, in some way, neutral. On the contrary, Marxists argue, the capitalist system developed to protect the interests of those with economic power. Power is distributed in the state to ensure that this happens. One way in which the state does this is to manipulate people's views. The Marxist model, therefore, incorporates Lukes' third face of power. The only way for power to be truly distributed to the masses, according to Marxist, is for the whole capitalist structure to be overthrown by revolution. It cannot be taken over by democratic means, it must be smashed. ...read more.