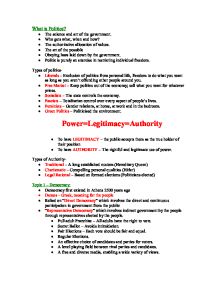 What is Politics? * The science and art of the government. * Who gets what, when and how? * The authoritative allocation of values. * The art of the possible * Obeying laws laid down by the government. * Politic is purely an exercise in restricting individual freedom. Types of politics- * Liberals - Exclusion of politics from personal life, freedom to do what you want as long as you aren't offending other people around you. * Free Market - Keep politics out of the economy; sell what you want for whatever prices. * Socialists - The state controls the economy. * Fascists - Totalitarian control over every aspect of people's lives. * Feminists - Gender relations, at home, at work and in the bedroom. * Green Politics - Politicised the environment. Power=Legitimacy=Authority * To have LEGITIMACY - the public accepts them as the true holder of their position * To have AUTHORITY - The rightful and legitimate use of power. Types of Authority- * Traditional - A long established custom (Hereditary Queen) * Charismatic - Compelling personal qualities (Hitler) * Legal Rational - Based on formed elections (Politicians elected) Topic 1 - Democracy: * Democracy first existed in Athens 2500 years ago * Demos - Greek, meaning for the people * Relied on "Direct Democracy" which involves the direct and continuous participation in government from the public * "Representative Democracy" which involves indirect government by the people through representatives elected by the people. * Full adult Franchise - All adults have the right to vote. * Secret Ballot - Avoids intimidation. * Fair Elections - Each vote should be fair and equal. * Regular Elections. * An effective choice of candidates and parties for voters. * A level playing field between rival parties and candidates. * A free and diverse media, enabling a wide variety of views. * "Liberal Democracy" * A form of representative democracy. ...read more.

o Rejection of privatisation of the Post Office and British Rail * No real reduction in over all spending * The state was re-structured rather than reined back * Pursued policies such as the poll tax * A blend of the free economy (neo-Liberalism) and the strong state (neo-Conservatism) * Sentiments of Nationalism and Patriotism (Falklands, Gulf War and Europe) * Strong believer of the Union and strong family values. * Based on the theories of Smith, Hayek and Freidrich. Conservatism- * Keeping things as they are i.e. a retention of status quo * Old Toryism and 19th Century Conservatism was suspicious and resistant to change, an anti-thesis to the revolution in France and America * Edmund Burke "Reflections to the Revolution in France" lays the foundations for modern Conservatism * Burkes Beliefs- * Attack on the values of the French Revolution * Reassertion of tradition * The organic society * Gradual Pragmatic Reform * Peel's Tomworth Manifesto 1837, was based on Burke's work and is created for the re-birth of Modern Conservatism * ARGUMENTS AGAINST- * Conservatives were suspicious of 'Age of Reason', a threat to traditional religious and secular authority * Liberalism was the ideology of he rising capitalist class (industrial revolution), Conservatism reflected the interests of the powerful landed classes. * Conservatives believe in: * A period of slow change is needed to avoid a massive social upheaval. * The lessons of the past act as a guideline for the future. * "We cannot know where we are, much less where we are going until we know where we have been" (Niskeet, Conservative) * Conservatism held its own in conflict with the Liberals in the 19th Century and then dominated the 20th Century as it adapted to change. * Accepted the principle of Keynesian demand management, the Welfare State, the mixed economic planning. Modern Conservatism- * Flexible pragmatism * Thatcher's legacy is a genuine monkey on the backs of the Conservatives * Major continued some of her work - privatizing the ...read more.

Dicey (1835-1922) is the main author * Enshrines principles such as natural justice, fairness and reasonableness Devolution- * Power is devolved from the centre, but unlike Federalism, it can be returned. * I.e. Wales, Northern Ireland and Scotland. * However, it is unlikely that power is returned, more likely that further powers will be given out, making the UK Semi-Federal. Constitutionalism- * The Govt. works within the understood rules of a constitution Codification- * Rules are written down in a single document Entrenchment- * Rules are written telling you how a constitution can be amended * i.e. in USA 2/3rds majority of the Senate and House of Representatives is needed in order to amend the constitution. Supremacy- * The constitution is the highest power Anti-Constitutionalism- * When people are against the idea that Government in which power is distributed and limited by a system of laws that must be obeyed by the rulers. Unconstitutional action- * When People don't follow the rules and regulations set down by the government Liberal Constitution- * A balance between governmental powers within parliament. Labour and the Jenkins Commission- The Demands of Charter 88- * A bill of Rights which reflects the first 10 amendments to the USA Constitution. * Freedom of information * A fair electoral system * A reformed democratic second chamber (house of lords) * A written Constitution The end of Parliamentary Sovereignty and the Unitary State- * Changes since 1997 have not really challenged Sovereignty, membership of the EU however clearly has. * The use of referenda, although not binding, does commit parliament. * The Human Rights Act, alters balance between Govt. and the Judiciary. * Devolution - English MP's have lost the responsibility for legislation in Scotland, but Scottish MP's have not in English constituencies * THE PAISLEY QUESTION Do we need a British Constitution? Purposes of a constitution: * Defines the limits on government * States basic laws * Distributes powers within a political system * Rights of the citizens * Fair and free elections * Defines sovereign territory ...read more.