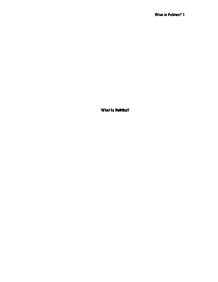 What is Politics? Among many political issues the topic of revolution as a way of social change has been highly contradictory. On the one hand, most scholars target the creation of a system that would be stabile and preserve its political and social order, replicating it over centuries. On the other hand, many of them believed that change is necessary if the society's political system lands in a deadlock. A change is also welcome is the government is corrupt. The website of the MultiEducation Inc. gives the following definition of the phenomenon: "complete and usually violent process by which the government and its manner of rule are taken out of power, and a new government is established" (MultiEducation Inc., n.d.). Perhaps the wittiest definition is that by the Canadian economist John Kenneth Galbraith who says that the revolution is "the kicking in of the rotten door" (John Kenneth Galbraith Quotes, n.d.). ...read more.

However, Locke did not call for violent action, although his Second Treatise on Government does not envisage a concrete procedure for change of power. Later Theorists on Revolution The late 19th century saw the emergence of a new political movement - Socialism. Socialists called on the authorities to give more rights to the working class and to secure the implementation of radical social changes that would alleviate the state of the working-class poor. However, different social scientists differed as to the support for radical removal of the current government by force. The 'reformist' view insisted that "socialism can be introduced gradually and without violence, by reforming the present set up" (Harman, n.d.). This view is also called 'social democracy', Fabianism or 'revisionism'. In contrast, Marx insisted on overthrowing the current powers using the most violent methods. He eagerly awaited that the revolution in his native Germany in 1847 would end with the victory of the working class, saying that "German bourgeois revolution could serve only as a direct prelude to a proletarian revolution' (Kautsky, 1934). ...read more.

Critique and Implications It would be interesting to find a universal and efficient approach to revolutions. It is inevitable that nations will overthrow governments that tyrannically oppress their citizens, such as, for example, Saddam Hussein's was. The rest of the nations have to choose whether to support revolutions that remove oppressive governments and to accept their leaders as legitimate or not. If we go by the Lockean definition and support governments that restore the just social order in order to express the view of society, we will find that the notion of society is ambiguous. In fact, many political groups proclaim that they represent the whole society, but few of them do so. The Marxist notion was much more definitive, and the Soviet government usually knew little hesitation as to which upheaval to support and which to ignore. However, it is hardly just, and few politicians will want to accept the view that we should approve of revolutions that establish the power of one social group. So the modern political leaders have to tread the slippery ground in deciding when to acknowledge the revolutions that are happening around the world. ...read more.