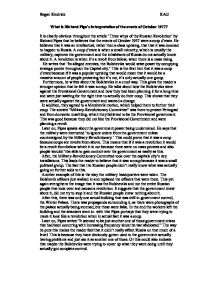 What is Richard Pipe's interpretation of the events of October 1917?

What is Richard Pipe's interpretation of the events of October 1917? It is clearly obvious throughout the article 'Three whys of the Russian Revolution' by Richard Pipes that he believes that the events of October 1917 were a coup d'etate. He believes that it was an intellectual, rather then a class uprising, that that it was doomed to happen to Russia. A coup d'etate is when a small minority, which is usually the military, captures the government and the inhabitants of Russia do not actually know about it. A revolution is when it's a revolt from below, when there is a mass rising. He writes that 'Its alleged enemies, the Bolsheviks would seize power by occupying strategic points throughout the Capital city.' This is the first hint that it was a coup d'etate because if it was a popular uprising that would mean that it would be a massive amount of people protesting but it's not, it's only actually one group. ...read more.

This could prove that it was a coup because coups are revolts from above. This means that if it was a revolution it would be a revolt from below which it is not because there were no mass protests and also people wouldn't be able to gain control over the government as easily as this. After, the Military-Revolutionary Committee took over the capitals city's key installations. This leads the reader to believe that it was a coup because it was a small political group. The fact that the Russian people didn't really know what was actually going on further adds to this. Another example of this is the way the military headquarters were taken. The Bolshevik officers just walked in and replaced the officers that were there. This yet again strengthens the image that it was the Bolsheviks and not the entire Russian people that took over and caused a revolution. ...read more.

Or this could also indicate that maybe the Bolsheviks were trying to cover up what they were doing until they actually got complete control. It seemed that the government knew what was going on but none of the Russian people actually did. Pipes writes that 'it was widely believed that as soon as the Constituent Assembly had met, the Bolshevik government would gracefully yield power. And the new masters did nothing to dispel the mirage.' This leads the reader to believe that the government seemed to know what was going on, whereas, the Russian people had no clue what was actually taking place. This yet again strengthens the view in which Pipes is portraying. Which is, that it's a 'bloodless coup.' To conclude, all of these, plus several other points show that Richard Pipes believed that the October revolt in 1917 was a coup as he believes it was a revolt from above and the Bolsheviks has it all planned out from the beginning. Regan Kindrick KAG ...read more.