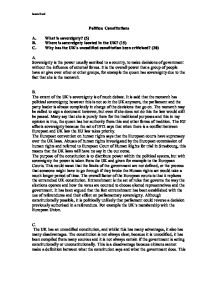 Politics: Constitutions A. What is sovereignty? (5) B. Where is sovereignty located in the UK? (15) C. Why has the UK's uncodified constitution been criticised? (30) A. Sovereignty is the power usually ascribed to a country, to make decisions of government without the influence of external forces. It is the overall power that a group of people have or give over other or other groups, for example the queen has sovereignty due to the fact that she is the monarch. B. The extent of the UK's sovereignty is of much debate. It is said that the monarch has political sovereignty; however this is not so in the UK anymore, the parliament and the party leader is almost completely in charge of the decisions that go on. The monarch may be called to sign a document however, but even if she does not do this the law would still be passed. ...read more.

You could even go as far to say that the power of this nation rests with the Prime Minister and that they have ultimate control due to their powerful role in Parliament created by the electoral system. Some may even argue that the UK is an elective dictatorship. The power at Westminster can be used to take away rights, powers and laws. There are no safeguards at all on the power that the Westminster government has. Pre-democratic elements still exist in the constitution of the UK. There are the House of Lords and the Monarchy. The House of Lords is an unelected body, which is chosen only by hereditary links. The Monarchy do not have such political importance nowadays but there is still a certain amount of it which the Monarchs of the country have. The fact that the Monarchy is fundamentally sovereign (not realistically) in the UK and it is completely unelected is very undemocratic. For it to be democratic, the people should have a say in who is in the House of Lords and who is to become the Monarch of the country. James Ford ...read more.