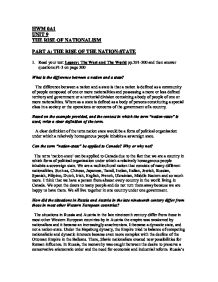 What is the difference between a nation and a state? The rise of Nationalism

In his Scottish campaign on 1879, Gladstone travelled by train to Liverpool to Edinburgh, stopping at towns on the way, and delivering speeches the condemned the immorality and costs of Disreali's imperial policy. After a second Scottish campaign in 1880, the electorate tossed out the Conservatives, and gave Gladstone and his Liberals a majority. Gladstone, who had supported the cause of national liberation in Europe, wrestled with Britain's imperial conflicts in Africa against the Boers, and nationalism in Ireland. When he introduced his Irish Home Rule Bill in 1886, he split the Liberal Party. As a result, the Conservatives- the party of patriotism and empire- and their leader Lord Salisbury, became the dominant party in British politics for the next two decades. The politician that I would have supported is William Gladstone. The reason for this is that he supported education for everyone. He believe in Peace, Retrenchment and Reform." By "peace" they meant free trade and opposition to costly foreign and colonial adventures. By "retrenchment" the Liberals meant a laissez faire policy in which the role of government was strictly limited, and the costs and taxes were reduced as far as possible. By "reform" they had in mind doing away with outmoded laws that benefited the privileged. Accordingly, the Liberals reformed the army and the civil service to eliminate patronage, enabled students who were not Anglicans to graduate from Oxford and Cambridge Universities, and in 1870, introduced national primary education. ...read more.

If a worker was sick or hurt, he could not go to work and could not make a living for their family, thus they would starve until he could go back to work. The Industrial Revolution also saw the appearance of child labour, in which children would work in factories, plantations and coal mines for up to twelve hours a day, and get paid about 2 dollars. It also saw women working to help support their families, if their husbands died or left them. The Industrial Revolution brought about many changes, which were not good for society but were what helped shape the world today. The nineteenth century was century full of ultimate changes that had an impact on the world for the rest of its entirety. It brought about women rights, nationalism, democracy and the Industrial Revolution, which was not very good for most people. It was a time when cities were formed, high mortality rates were actually seen for consecutive years and the poor of the world flourished. However it was a time that made our world was it is today. The nineteenth century did in fact pave the way from aristocracies to democracies, from elite culture to mass culture, and from cottage industries to industrial factories. The impact of nationalism, in the last 150 years, has extended well beyond Western society. Create a Venn diagram or comparative chart that shows the similarities and differences between the nationalist movement of a European country in the 1800's with that of a non-European country in the 1900's. SIMILARTIES SIMILARITIES DIFFERENCES DIFFERENCES 1800'S 1900'S 1800'S 1900'S ...read more.