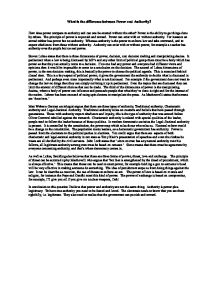 What is the difference between Power and Authority?

What is the difference between Power and Authority? How does power compare to authority and can one be exerted without the other? Power is the ability to get things done by others. The principle of power is to punish and reward. Power can exist with or without authority. For instance an armed robber has power but no authority. Whereas authority is the power to enforce law and take command, and to expect obedience from those without authority. Authority can exist with or without power, for example a teacher has authority over the pupils but no real power. Steven Lukes states that there is three dimensions of power, decision, non decision making and manipulating desires. In parliament when a law is being discussed by MP's and any other form of political group there must be a body which has power so that they can actually come to a decision. ...read more.

The third of the dimensions of power is the manipulating desires, where a body of power can influence and persuade people that what they've done is right and for the interest of the nation. Labour has been excused of using spin-doctors to manipulate the press. As Machoavelli states that humans are 'deceivers.' Max Weber a German sociologist argues that there are three types of authority, Traditional authority, Charismatic authority and Legal-Rational Authority. Traditional authority relies on customs and beliefs that have passed through generations. Those with authority expect obedience and loyalty, this is the type of authority that was around before Oliver Cromwel rebelled against the monarch. Charismatic authority is related with special qualities of the leader, people tend to follow the leader because of these qualities. ...read more.

This means that threat can be used to exert power, for example holding a gun to someone's head will be very effective in making someone do something. The idea of punishment stops us from doing things against the law. It can be describe as coercion, the use of threats to enforce an act. The power of love is based on morals and religion, for instance the Pope and Gandhi exert this kind of power. The power of exchange is based on compromise, for example, I'll give you oil if you give me nuclear weapons, Doh! In conclusion to this question I believe that power and authority are not the same thing. Authority is power plus legitimacy. To have true authority you need to be feared and loved. The electorate needs to know that you are there rightfully, i.e. legitimate. They also need to realise that the government can punish and reward. ...read more.