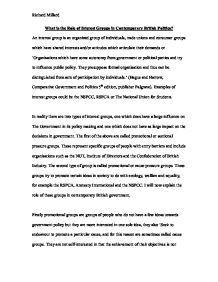 What is the Role of Interest Groups in Contemporary British Politics?

What is the Role of Interest Groups in Contemporary British Politics? An interest group is an organized group of individuals, trade unions and consumer groups which have shared interests and/or attitudes which articulate their demands or 'Organisations which have some autonomy from government or political parties and try to influence public policy. They presuppose formal organisation and thus can be distinguished from acts of participation by individuals.' (Hague and Harrow, Comparative Government and Politics 5th edition, publisher Palgrave). Examples of interest groups could be the NSPCC, RSPCA or The National Union for Students. In reality there are two types of interest groups, one which does have a large influence on The Government in its policy making and one which does not have as large impact on the decisions in government. The first of the above are called protectional or sectional pressure groups. These represent specific groups of people with entry barriers and include organisations such as the NUT, Institute of Directors and the Confederation of British Industry. The second type of group is called promotional or cause pressure groups. These groups try to promote certain ideas in society to do with ecology, welfare and equality, for example the RSPCA, Amnesty International and the NSPCC. I will now explain the role of these groups in contemporary British government. Firstly promotional groups are groups of people who do not have a few ideas towards government policy but they are more interested in one sole idea, they also 'Seek to endeavour to promote a particular cause, and for this reason are sometimes called cause groups. ...read more.

(http:historylearningsite.co.uk/pressure_groups.htm.) An extremely useful example of an outsider group is that of the Irish Republican Army of whom the government flatly refused to cooperate with them because they were seen as a terribly violent organisation of which could have been of immense threat to the government and the people of Britain itself, so thought it was of too much risk to cooperate. In reality these types of organisations do not have any real impact on policy making so they try to get their point across by other means whether violent or non-violent. On the other hand however the interest groups which do have an effect on the government do so with large respect, of which I now will discus in the below. There are a few general rules that determine which of those above is in or out in terms of the policy decision making. The protectional groups in the main tend to have two types of groups within itself; the first has a large voice due to a number of substantial, practical reasons. It is called an insider group (also some promotional groups), 'They have strong links with decision makers and are regularly consulted. They are groups that the government - local or national - considers to be legitimate and are, therefore, given access to decision makers.' (http:historylearningsite.co.uk/pressure_groups.htm.) A good example of this in Britain is: 'Since most policies relating to civil liberties and political rights are developed by the Home Office, a group such as Liberty (formerly the National Council for Civil Liberties) ...read more.

In Britain and in all states an interest group activity 'Tends to centre on the bureaucracy as the key institution in the process of policy formulation. Access via this channel is largely confined to major economic and functional groups, such as large corporations and trade unions.' (Heywood 1997). This is probably most evident when in the 1980's the National Union of Teachers consulted with the government over changes to the education system. Also on that issue the 'Influence of the defence industry on the Ministry of Defence is profound,' (Weir & Beetham 1999), further enhancing the point that governmental organisations do need expertise help in even sensitive issues like these ones. In conclusion I think that it is fair to say that pressure groups do have an impact on the policy decision making in the British government. However I think that from my research there are really three groups of which I interest groups can be categorised in to. Firstly there are two groups of which have an effect on the policy making; these are the promotional insider groups and protectional groups. This is because of their ability to share their expertise with the government to ensure the correct outcome is reached. Secondly there are the promotional outsider groups who do not have any effect but set about to portray their message in which way possible. So my final conclusions are that without interest groups I do not feel that there could be a way to reach the desired outcome for the government, the organisation involved and the people of the British state. ...read more.