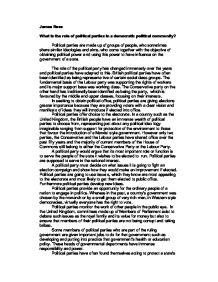 What is the role of political parties in a democratic political community?

James Rees What is the role of political parties in a democratic political community? Political parties are made up of groups of people, who sometimes share similar ideologies and aims, who come together with the objective of obtaining political power and using this power to have influence on the government of a state. The role of the political party has changed immensely over the years and political parties have adapted to this. British political parties have often been identified as being representative of certain social class groups. The fundamental basis of the Labour party was supporting the rights of workers and its major support base was working class. The Conservative party on the other hand has traditionally been identified as being the party, which is favoured by the middle and upper classes, focusing on their interests. In seeking to obtain political office, political parties are giving elections greater importance because they are providing voters with a clear vision and manifesto of ideas they will introduce if elected into office. Political parties offer choice to the electorate. In a country such as the United Kingdom, the British people have an immense wealth of political parties to choose from, representing just about any political ideology imaginable ranging from support for protection of the environment to those that favour the introduction of a Marxist style government. ...read more.

In the United Kingdom, the aims of the Conservative Party, the present party in opposition is to constructively criticise the government's policy and legislation. Another function of the political parties in opposition is to seek changes to government bills where it wants and also propose it's own policies of dealing with the country's problems or major issues to enable them to attract greater public support and with that a greater chance of them gaining office. Modern political parties wish to appeal to as many people as is possible. Although there likely there is some basis for agreement between the members of a political party for it to work in the first place, it would be unrealistic to think that one party could totally represent all the ideas and beliefs of all its members. It is necessary for a political party to appeal to as many people as possible in order to reap as much support as possible to maximize its chances of being elected into office. Another important role of political parties is to foster good relations with organisations, which represent large amounts of society. An example of this is the Labour party's close relationship with the Trades Union Congress (TUC), which represents trade unions across Britain, representing more than 7 million people. In conclusion, it is clearly evident that political parties in democracies have many essential functions and roles to play in society. FOOTNOTES 1]http://www.oas.org/OASNews/2002/English/Jan_Feb/art9. ...read more.