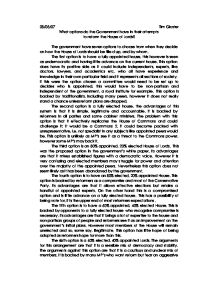 What options do the Government have in their attempts to reform the House of Lords?

08/05/07 Tim Gloster What options do the Government have in their attempts to reform the House of Lords? The government have seven options to choose from when they decide on how the House of Lords should be filled up, and by whom. The first option is to have a fully appointed house, this however is seen as undemocratic and having little advance on the current house. This option does have its positive side as it could include independents, experts, like doctors, lawyers, and academics etc. who all have experience and knowledge in their own particular field and it represents all sections of society. If this were the option chosen a committee would need to be set up to decides who is appointed, this would have to be non-partisan and independent of the government, a royal institute for example. ...read more.

The third option is an 80% appointed, 20% elected House of Lords. This was the proposed option in the government's white paper. Its advantages are that it mixes established figures with a democratic voice. However it is very confusing and elected members may struggle for power and attention over the majority of the appointed peers. Nevertheless this option does not seem likely as it has been abandoned by the government. The fourth option is to have an 80% elected, 20% appointed House. This option is backed by reformers as a compromise and most of the Conservative Party. Its advantages are that it allows effective elections but retains a handful of appointed experts. On the other hand this is a compromised option and is little advance on a fully elected house. ...read more.

It is backed by many MP's who want reform but fear an aggressive fully elected house, as mentioned in the second option. The chances of this option being implemented are excellent, it is seen as a good compromise and the government would accept it. The sixth option is a 50% appointed, 50% elected House. This option, even though it lacks strong support, is quite likely as all sides could settle for this. Its advantages are that it offers even numbers and neatness therefore making it easier to understand and bringing a balance of legitimacy and expertise. However this could lead to deadlock and the ultimate compromise. There is an eighth option but it is extremely unlikely. And that is to completely abolish the House of Lords. But this will probably never happen as it would give the Commons too much power and would not be very popular, even though some MP's are calling for it. ...read more.