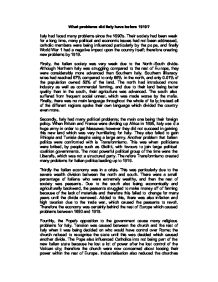 What problems did Italy have before 1919?

What problems did Italy have before 1919? Italy had faced many problems since the 1890's. Their society had been weak for a long time, many political and economic issues had not been addressed, catholic members were being influenced particularly by the pope, and finally World War 1 had a negative impact upon the country itself; therefore creating new problems by 1919. Firstly, the Italian society was very weak due to the North-South divide. Although Northern Italy was struggling compared to the rest of Europe, they were considerably more advanced than Southern Italy. Southern illiteracy rates had reached 87% compared to only 68% in the north, and only 0.01% of the population owned 50% of the land. The north had introduced more industry as well as commercial farming, and due to their land being better quality than in the south, their agriculture was advanced. ...read more.

Therefore Transformismo created many problems for Italian politics leading up to 1919. Thirdly the Italian economy was in a crisis. This was particularly due to the severe wealth division between the north and south. There were a small percentage of Italians who were extremely wealthy, and then the rest of society was peasants. Due to the south also being economically and agriculturally backward, the peasants struggled to make money off of farming because of the lack of materials and therefore this failed to change for many years until the divide narrowed. Added to this, there was also inflation and high taxation due to the trade war, which caused the peasants to revolt. Therefore the economy was certainly behind the rest of Europe which caused problems between 1890 and 1919. ...read more.

The National debt had also increased dramatically during the war - in 1914 Italy were in debt by 16 billion Lira, yet by 1918 the national debt had risen to 85 billion Lira. Although there was still the opposition of the Pope and there were violent protests due to the shortage of food, there were some positive aspects after WW1; industry expanded which caused an increase in female employment, and peasants were now able to pay off some of their debts because the rents froze - therefore it appeared that Italy would now be able to begin improving as a whole nation. Overall, it could be said that although Italy would have inevitably faced many problems leading up to 1919, the nation would possibly not have been in so much turmoil had the state been less divided by the Pope and economic issues due to there being less influences, making the society much stronger against the rest of Europe. ...read more.