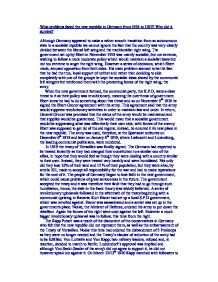 What problems faced the new republic in Germany from 1918 to 1923? Why did it survive?

What problems faced the new republic in Germany from 1918 to 1923? Why did it survive? Although Germany appeared to make a rather smooth transition from an autonomous state to a socialist republic we cannot ignore the fact that the country was very clearly divided between the liberal left wing and the traditionalist right wing. The government set up by Ebert in November 1918 was mainly socialist, but not extreme, wishing to follow a more moderate policy which would maintain a socialist basis but not too extreme to anger the right wing. However a series of decisions, which Ebert made, aroused opposition from both sides. His main problem seemed to be the fact that he had the true, loyal support of neither and rather than deciding to side completely with one of the groups he kept the socialist ideas shared by the communist left wingers but reinforced them with the protecting forces of the right wing; the army. When the new government formed, the communist party, the K.P.D, were a clear threat to it as their policy was revolutionary, meaning the overthrow of government. Ebert knew he had to do something about this threat and so on November 9th 1918 he signed the Ebert-Groner agreement with the army. This agreement said that the army would suppress revolutionary activities in order to maintain law and order. In return, General Groner was promised that the status of the army would be maintained and that supplies would be guaranteed. This would mean that a socialist government would be suppressing what was effectively their own side, with forces of the enemy. Ebert was supposed to get rid of the old regime, instead, he ensured it its new place in the new republic. The army was used, therefore, at the Spartacist outbursts on December 6th 1918 and later on January 6th 1919, where Liebnecht and Luxemburg, the leading communist politicians, were murdered. ...read more.

However this would also lead to unemployment and a decrease in people's wages. The government would become unpopular and the allies would be led to believe that the reparations could be made when they couldn't. The second option available to them would be to continue borrowing and printing more money. The more money in the economy would mean a revival of industry that would lead to the decrease of inflation and the budget deficit. The government decided to go with the latter option. From 1919 to 1923 inflation rose steadily and Germany was still unable to pay the reparations. Germany had hoped that the allies would decrease the amount while she also hoped the people of Germany would link their economic problems with the allies, in which case the blame would be directed away from Ebert's government. Neither of their hopes were fulfilled and instead by 1921, the allies were demanding Germany pay 1000 million, part of the sum of money which she owed. When Germany did not pay, the allies responded by occupying areas east of the Rhine including Dusseldorf, Druisburg and Ruhrort. They continued to demand the paying of the reparation and finally agreed that the total cost would be 6600 million which would be paid in gold. Again Germany was unable to pay, but this time she requested a moratorium, a temporary suspension of payments. The allies were divided on the topic with Britain acceptin the request but France disagreeing. Due to France's vote Germany had to pay some of the reparations. By 1923 she was still in debt and not in a position to repay the allies. France decided that it was time to take some serious action, so accompanied by Belgium, French troops occupied the Ruhr mines of Germany so they could oversee the payments. The Ruhr mines were a place of great significance in Germany as not only did they make 80% of her steel and 71% of her coal, but they supplied resources for industrial production everywhere in the country. ...read more.

When the French occupied the Ruhr mines and a policy of passive resistance was followed, a sense of unity passed throughout Germany. This allowed Germany enough time to do something about the problem before the people get angry again. They did this by employing Stesemann, who introduced a new currency and saved Germany by sorting out the problem of reparations once and for all. Also regarding the economic problem, Germany was lucky in that although economic collapse came on 1923, up to that point there had been no mass unemployment. Production was high, inflation was mild and they were allowed to pay for the reparations in kind. Therefore the economic slump lasted only for a year as opposed to a long term problem. In addition there was the Munich Putsch. Another unorganized attempt with ineffective leadership made it impossible for it to succeed. In reality, the republican government was lucky that these uprisings were so uncoordinated or it would be hard to believe that there would have been such a hard time getting rid of the government otherwise. Finally, the constitution allowed certain things which it is unlikely that, otherwise, the government would have survived. Article 48, which allowed Ebert to rule by decree when Germany was in a state of emergency meant that legislation moved quicker and more could be done at a time when constitutionalism would have taken too long and possibly be too late. Also the fact that proportional representation existed meant that everyone got heard. If certain groups of people had been suppressed and were not allowed freedom of speech, then possibly a more angry uprising would have taken place and been more effective. In conclusion, it appears as though at this point Germany had gone through its worse as a republican state and so should have been able to handle all the problems to come. This however was to be challenged in the future, but for the next few years, a peaceful time was in store. ...read more.