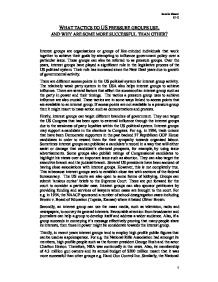 What tactics do US pressure groups use, and why are some more successful than others?

WHAT TACTICS DO US PRESSURE GROUPS USE, AND WHY ARE SOME MORE SUCCESSFUL THAN OTHER? Interest groups are organisations or groups of like-minded individuals that work together to achieve their goals by attempting to influence government policy over a particular issue. These groups can also be referred to as pressure groups. Over the years, interest groups have played a significant role in the legislative process of the US political system. Their role has increased since the New Deal years due to growth of governmental activity. There are different access points in the US political system for interest group activity. The relatively weak party system in the USA also helps interest groups to achieve influence. There are several factors that affect the success of an interest group such as the party in power and their timings. The tactics a pressure group uses to achieve influence are also crucial. These tactics are in some ways linked to access points that are available to an interest group. If access points are not available to a pressure group then it might resort to mass action such as demonstrations and protests. ...read more.

Thirdly, in recent years interest groups tend to employ high profile public figures that can be used as a spokesperson. For e.g. the National Rifle Association had amongst its members, high profile people such as the former president George Bush and the actor Charlton Heston. Therefore, NRA was continually in the news. Also, its membership of 4.3 million gun owners and its annual budget of $200 million meant that it was more successful than other groups e.g. Hand Gun Control Inc. Similarly, the National Federation of Independent Businesses changed from a low profile organisation to a powerful political force as it established close relations with the Republican Party. Another tactic used by many groups, particularly the wealthy ones is employing professional lobbyists. It has been suggested that the number of lobbying firms and lobbyists in Washington increased in the 1980s and 1990s particularly in 1997 when the new Lobbying Disclosure Act of 1995 came into effect. These lobbyists are employed to carry out several important activates including alerting clients about issues, developing policies, maintaining relations with the government, mobilising grass roots support and working for amicus briefs. ...read more.

Hiring professional lobbyists in quite expensive and costs from approximately $5000 to $30,000 per month. Also, in order to advertise in newspapers and televisions to get their message across funds are needed. For e.g. printing an advertisement in a newspaper costs over $13,000. Thirdly, the political skills are very important in order to promote good links with decision makers. An interest group needs to build contacts within the governmental system so that it can effectively implement policies and have a say within the political process to propose or to oppose a public policy initiative. Hence, it can be said that the tactics used by a pressure group affect its success within the US political system in several different ways. Lobbying is one of the most important tactics that has worked efficiently since the past several years especially after the Lobbying Disclosure Act of 1995 came into effect. In order for an interest group to be successful it must have a considerable amount of resources. The relatively wealthy interest groups are usually successful by employing professional lobbyists as they have a lot of finance and resources needed. Javeria Masud 13 O 1 ...read more.