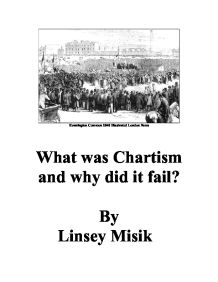 What was Chartism and why did it fail

Kennington Common 1848 Illustrated London News What was Chartism and why did it fail? By Linsey Misik Chartism: 'The principles and practices of a party of political reformers, chiefly workingmen, active in England from 1838 to 1848'. This was working class vocalizing their grievances of poor pay and working conditions with the purpose of achieving representation in the government. Relatively easy to sum up in a sentence but does not encompass the true Chartist. It can be difficult to understand the plight of others and as all historians know, hard to give an un-biased view on a specific time in history. The initial historians such as Mark Hovell, saw Chartism as an attempt to shake the equilibrium of the establishment by the uncivilized working class or a 'howl for hunger'. Other historians viewed the movement as a revolutionary change to create a democratic society where 'the people are the source of all power'. In which format you choose to translate Chartism it does define how we look at its failures. At the end of ten years the movement achieved none of its initial demands and therefore could be deemed a failure but is it a fair estimation of the movement as a whole. The members organised meetings and published newspapers which exposed their plight to the nation and united the working-class people. If the movement was digested by the ruling class and it halted their idea of complacency then the Chartist movement equates to some success in planting seed in the government minds. ...read more.

The first backed with 1.28 million signatures, the second with 3.3 million signatures, the third with over 6 million signatures (although there seemed to have several fraudulent signatures making it around 2 million real signatures). The petitions were rejected every time and there ensued outbreaks of violence which the government took swift and extreme steps to restore order. The initial phase of Chartism was quickly thwarted by the utilised ever-increasing army by sending the main leaders to gaol notably John Frost who organised the Newport Rising when over 5000 miners attacked the town and consequently twenty were killed by troops sent by the authorities and Frost sentenced to death (but was transported). Around 1842 the main leaders emerged from gaol and reconvened asking members to pay a penny a month. In the final phase (1847-8) whilst there were revolutions on the continent the flamboyant O 'Connor alongside his fellow Chartist were delivering their final petition en mass. The large body of petitioners were met by police and then told by O 'Connor to disperse. They were delivered in three cabs but met with ridicule when it was realised it contained bogus signatures. This was the end for Chartism and it was written off by most as an unsuccessful attempt at hearing their voices in government. The humorous cartoon below by John Leech published in Punch magazine displays his interpretation of the rise and fall of Chartism. ...read more.

The Anti corn league also had the support of the middle classes, along with their money. The violence of the Chartists and a reluctant O Connor for to accept the middle classes would be to 'domesticate the charter' could also be attributed to their downfall. The three petitions were handed to the government in time of economic hardship and as the chartist folded Britain was moving into a time of prosperity this cut the price of bread from 11.5p in 1847 to 7p in 1850. This improved the quality of life and led more employees to the trade unions or cooperatives and left Chartism abandoned. This is difficult to back up this evidence as the severe depressions of 1839 and 1842 did were eradicated it is difficult to prove that the living conditions were in fact improved. D Thompson noted that 'As far as achievement of the six points went, the Chartists failed completely.' So was Chartism itself a failure? In the industrial towns of Lancashire and Yorkshire the movement was to create a distinctive culture among the working classes. It gave an understanding of the need to unite for the cause to provide essential focus. It gave a blueprint into how to formulate a protest and to vocalise and circulate nationally the needs of the cause. The indent that the chartists left imprinted on the mind of many ordinary working class families was summed up by Edward Royle 'the greatest achievement of was Chartism, a movement shot through not with despair but with hope. ...read more.