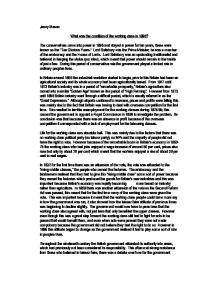 What was the condition of the working class in 1895?

Jenny Mason What was the condition of the working class in 1895? The conservatives came into power in 1895 and stayed in power for ten years, these were known as the "Ten Glorious Years." Lord Salisbury was the Prime Minister; he was a member of the aristocracy and the House of Lords. Lord Salisbury was an upstanding traditionalist and believed in keeping the status quo intact, which meant that power should remain in the hands of just a few. During this period of conservative rule the government played a limited role in ordinary peoples lives. In Britain around 1800 the industrial revolution started to begin, prior to this Britain had been an agricultural society and its whole economy had been agriculturally based. From 1847 until 1873 Britain's industry was in a period of "remarkable prosperity," Britain's agriculture also moved into a similar "Golden Age" known as the period of "High Farming". However from 1873 until 1896 British industry went through a difficult period, which is usually referred to as the "Great Depression." ...read more.

This was important because it meant that the working class people could have more say in how the government was run, it also showed how the laissez faire attitude of previous times was beginning to decline slightly. The government would now have to pass laws that the working class also agreed with, not just laws that only benefited the upper classes. However even though this was a great step forward the working class still had to fight for acts to be passed that would benefit them, and even when acts were passed they were not made compulsory because the government did not believe they had the right to do so. However in 1895 this attitude began to change as the government realised it had to play some sort of role in peoples lives. Throughout the nineteenth century the British government extended its authority into areas, which had previously not been considered its responsibility. This often met strong resistance from those who believed in laissez faire, there was a debate over how far the government should intervene on economic matters that complicated the response of the authorities over social issues such as poverty, sanitation, factory reform and education. ...read more.

Britain was also a democratic country with two political parties, the conservatives and the liberals. Despite all this there was a lot of faults in Britain in 1895 especially concerning the well being of the working class. Britain's towns were becoming grossly over crowded due to people moving from the country into the towns and cities to find work in the factories, which dominated the towns and cities. As there were no council houses people had to live in houses owned by landlords. There was also limited sanitation which meant that Britain was still experiencing outbreaks of terrible diseases such as Cholera and Typhoid. There was very limited state intervention, which in turn was not helping the tremendous unemployment rates and the extreme poverty that people were suffering because they were finding it impossible to help themselves. The government did not help people when they needed help because they believed in self-help and also because laissez faire was still lingering this resulted in extreme poverty cause by homelessness and unemployment. This was not helped by the fact that the working class were not represented by any political party. ...read more.