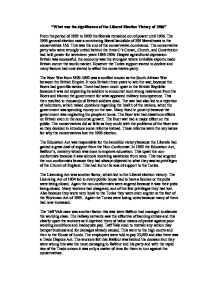 &quot;What was the significance of the Liberal Election Victory of 1906&quot;.

"What was the significance of the Liberal Election Victory of 1906" From the period of 1895 to 1900 the liberals remained out of power until 1906. The 1906 general election saw a convincing liberal landslide of 399 liberal seats to the conservatives 156. This was the end of the conservative dominance. The conservative party who were strongly united behind the three C's Crown, Church, and Constitution had held power for seventeen years 1886-1906. Despite agricultural depression Britain was successful, the economy was the strongest where invisible exports made Britain corner the world market. However the Tories support started to decline and many factors had now started to affect the conservative party. The Boer War from 1899-1902 was a conflict known as the South African War between the British Empire .It took Britain three years to win the war, because the Boers had guerrilla tactics. There had been much upset in the British Republic because it was not expecting its soldiers to encounter such strong resistance from the Boers and blamed the government for what appeared military incompetence. ...read more.

The Licensing Act of 1904 led to every public house had to have a license or the pubs were being closed. Again the non-conformists were angered because it was their pubs being closed. Many workers had disagreed, and of the few privileges they had lost. Also because they were very loyal to the Tories they were even angrier at the fact of the Workman Act of 1905. Again the Tories were losing votes because many of them had now increased. The Taff Vale case was another factor this was were Balfour had managed to alienate the working class. The railway servants saw the effective of banning strikes and this clearly upset the workers as it deprived them of value means of protest against poor working conditions and inadequate pay. Taff Vale sued to restrain any action may hamper business and for damages already caused. This went to the high courts and then to the House of Lords. The employees were told to pay 23,000 and also there was a Trade Dispute Act. The workers felt that Balfour was behind the decision but they were wrong this was the most damaging to Balfour and his party ...read more.

In this way it would provide finance for social reform and promote imperial preference but this was unpopular amongst the Tory party. Balfour had attempted to take the middle course on the reform, which had resulted against the party leading them to spilt. The spilt was so bad that it had led him to resign. The whole issue on tariff reform worked against the conservatives had helped the liberals to unite. The consequence saw a rise in turnout for the Liberals, the Liberals anti Tariff campaign attracted many voters from key places. In conclusion the factors I had listed above all had an affect on the conservative party. Each of these factors contributed massively in a way of keeping the conservatives accountable to the public. Many of the reforms had a major affect on the public, trade unions and the non-conformist; they either disagreed or were very angered. Also with Balfour as prime minister he also had made serious miscalculations, which again angered the public. With these factors the liberals had gained the publics confidence in them to sought out the problems of the conservatives, which gave them a landslide victory in the elections. ...read more.